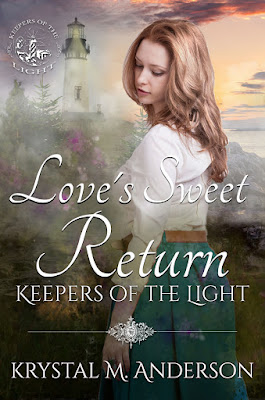 Love's Sweet Return
(Keepers of the Light #1)
By Krystal M. Anderson
Sweet Historical Romance
ebook, 115 Pages
January 7, 2020
Keepers of the Light is a multi-author series that I'm ecstatic to be part of. Set in a small coastal Oregon logging town, these sweet stories feature the two lighthouses that guide ships past the treacherous shoreline and the couples who find their happily-ever-afters.

She lost the only thing she ever truly wanted: love. What could be worse? But when Charlotte Pullard’s ship wrecks off the Oregon coast in a terrible storm, she wakes in the unfamiliar keepers’ quarters of a lighthouse. When the keeper who pulled her from the wreckage turns out to be the man she loved and lost, can Charlotte find it in her heart to forgive him and embrace love’s sweet return?
Find out in this sweet historical small-town romance full of walks on the beach, the gathering of close friends, a simple coastal Christmas, and a sweeping love story centered around a majestic white lighthouse.

Charlotte Pullard opened her eyes to the gray of dawn, blinking slowly. Gradually, a beamed ceiling came into focus… but it wasn’t her ceiling. Whose ceiling was it? She closed her eyes again, thinking.

She’d kissed her mother goodbye. Something about that felt sad, wrong somehow. Maybe she hadn’t wanted to leave. And her father… her father…

Charlotte’s eyes flew open and she sat up so quickly that her head began to spin. Sinking back down to the pillow, she touched her forehead softly, her breath coming in short bursts. Her father had sent her away, as easily as a load of freight aboard one of his many vessels. She’d placed one foot mindlessly over the other, turning her back on all she’d ever known. It was to be a short trip, no longer than two days until she’d reach Crescent City, California. Then the sky puckered sourly, darkening beyond the shade of rain to something far more formidable.

The storm with waves as big as mountains, waves so steep that her stomach would flutter every time the ship slid down the sides of them. The water was icy cold, the thunder as loud as rocks grinding together. Or had that been the ship crashing into protruding basalt?

She shook her head at the nightmare, the terror and tumult of the darkness that seemed unreal, yet too vivid to be fantasy. Then she remembered Woody, that he’d dragged her below deck to her room and shouted at her to stay put. No sooner had the words spilled from the sailor’s mouth than she found herself in the water, so breathtakingly cold and angry that it consumed her every thought and feeling…

A tear ran down her temple.

It was horrible, all of it. Yet here she was, alive, in a quiet room somewhere on shore. No, not entirely quiet, for there were the waves, not villainous and uncaring as she remembered, but rhythmic and steady.

She placed her palms flat against the mattress and slowly, so slowly pressed herself upright. There. That wasn’t so bad. Breathe in, breathe out. The deep breaths made her throat and lungs burn.

What day was it? Where was she, exactly? Where was the rest of the crew? Loud questions filled her head, vying to be first to receive an answer, but she plucked them away.

One thing at a time.

The bedroom was small and bright in the early morning light, containing only the bed she sat upon, a three-drawer bureau, and a washstand, which snagged her attention. Fingers darting to her unadorned neck, Charlotte swung her bare feet to the floor and stood, snatching the golden locket from the washstand. She’d never taken it off, not since he’d given it to her on that chilly, cloudless night last spring. A small smile stretched her lips as she cradled the token in her palms, lost in the memory of his strong hand on her cheek, how he had almost kissed her; how happy she’d been gazing into his blue eyes as deep and stimulating as the ocean itself.

But she knew the tragic ending to that story. Maxwell Tucker had filled her heart and head with his affections, then abandoned her to heartache, confusion, loneliness. Worst of all, she knew wholeheartedly that she could never love another as she’d loved him. It was that small word that kept the golden locket in her pocket always.

For no matter the pain he had later put her through, he had given her the cherished necklace out of love. The locket – and the memories - were all she had left of those happy days, and each time she opened it, those joyous recollections tumbled out.

Standing tall, Charlotte stretched her hands high above her head, rolled her shoulders, then used her fingers to comb through her tangled copper tresses. Rips and stains covered her dress… and hadn’t she been wearing stockings? She groaned, knowing she must look awful.

Her rumbling stomach drew her out of self-inspection and through the little cottage. Good heavens, but it was a mess! The furniture, though in good condition, lay in heaps about the sitting room, and the kitchen looked like it hadn’t had a thorough cleaning in ages. Whoever it was who lived in this grimy little place must be dreadfully slovenly. Then she noticed the staircase at the back of the house and couldn’t keep herself from wandering towards it. Curious, she climbed one set of stairs to a low-ceilinged garret and gasped in pleasure, lacing her hands together. The single window let in soft, muted light, perfect for reading one of the books from the rows of shelves filling the narrowest wall.

Thrilled as she was to have found the library, she quickly forgot about the books, for the shelves continued around the entirety of the room and displayed the most wonderful collection of seashore knickknacks she’d ever seen! Sea shells in every shape and color, the largest as big as her head, the smallest as little as the fingernail on her pinky; white sand dollars and chunks of coral; bright green and blue sea glass, smoothed by the ocean. Oh, she could spend a week in this room examining each and every piece! It would only be fair to amend her earlier hasty assessment of the occupant, she decided. Whomever this charming cottage belonged to must be utterly fascinating.

Pursing her lips, Charlotte remembered herself and her situation and backed out of the room. She should be mindful of her host, not traipse around his or her personal space as though it were a public museum. And where was this person, anyway? Perhaps she’d find him or her at the top of these stairs. Up she climbed, bewildered by the number of steps.

Finally, she came upon another room with a closed door, but after peeking inside to find it dark and devoid of persons, she continued her ascent, fighting lightheadedness. Next came an open, round room with a padded chair and writing desk topped with an ink pot and book, and some sort of mechanical device in the very center opened to the room above. Suddenly, the random tower made sense. I’m in a lighthouse!

Rungs of a ladder rose to access the top of the tower, and on that ladder, two legs in soiled men’s trousers. Charlotte cleared her throat loudly.

The man stilled but did not come down.

“Excuse me, good sir,” Charlotte began, thinking maybe he was hard of hearing. The silence was getting a bit awkward. “I’d like to thank you for bringing me here after that awful storm. Do you know where the others…”

Her sentence trailed off as the man descended, as she began to recognize his trim waist and broad shoulders. He stood at the bottom of the ladder, hesitating to turn around. He didn’t need to – she knew exactly who he was.
Excerpted from Love's Sweet Return by Krystal M. Anderson. Copyright © Krystal M. Anderson.
About the Author 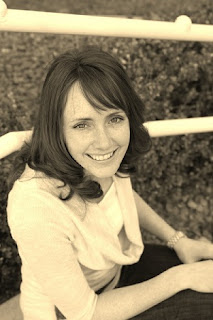 Krystal M. Anderson is a Utah, USA native and a wife and mother of four young children, including a set of twins. She loves telling stories to her children and they remind her to write down their favorites. She grew up on horseback and treasured any time spent riding through the red sands and sagebrush, always yearning to find out what was over the next ridge. Nothing makes her happier than being a wife and mother... but reading is a very close second!