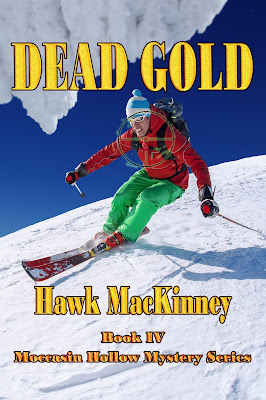 ~~~~~~~~~~~~~
GENRE: Mystery/Suspense
~~~~~~~~~~~~~
BLURB:
The dazzling lure of Olympic gold fame is a spotlight glare hotter than any fifteen minutes of fame.
During plans for a cross-country ski vacation, Aspen Police Department Criminal Investigation Division Detective David “Spinner” Krespinak and SEAL-bud Craige Ingram are ensnared by glamour, upmarket glitz and bling, and greed in the deadly champagne powder world of a money-gets-you-anything high-country ski-mecca. Body parts start turning up in the most unlikely places. As the two friends start their investigation, A hornets nest of the local elite do not want the publicity. For good reason it seems, they may be part of the mystery of bodies and body parts piling up at the morgue.
The closer they get to the killer the more confused they become. Who is behind the murders and mutilation? The list of suspects grows as they close the net on the killer.
The tender underbelly of Aspen is not what it seems. It is a raw open sore that oozes blood, drugs, and murder.
~~~~~~~~~~~~~
EXCERPT:
Spinner staggered the clutch and gear-shift. Kept his foot off the brakes as his vehicle slewed in the razor-edged chunky refreeze of the deep off-road ruts until coming to a stop. Killed the motor, and set the hand brake. Gusts of wind sliced at a square jaw on his devil-may-care rugged face as he climbed out and turned up the collar on his sheepskin coat. Big thick champagne-powder snowflakes clung for a moment to dust his dark hair, and just as quick blew-gone in the capricious strong up-slope drafts. He ducked under the fluttering yellow plastic ribbon with its black letters: POLICE LINE—DO NOT CROSS.
The charred black remains of the older model sedan slumped in a sooted blotched circle surrounded by undulating pristine white and candlestick-caked trees. It spoke loud and clear to Spinner—the burn had continued for some time after the storm. Wheel rims, frame, heat-crazed windows were still smoldering from hood to trunk.
As he walked toward her, salt-and-pepper-haired Pitkin County Medical Examiner-Coroner Candelaria Lopez didn’t have to look up. She knew the cadence of Spinner’s footsteps. “Looks like we have us a bungled hurried torch job.”
~~~~~~~~~~~~~
AUTHOR Bio and Links:
Hawk MacKinney served in the US Navy for over 20 years.  While serving as a Navy Commander, he also had a career as a full-time faculty member at several major state medical facilities. He earned two postgraduate degrees with studies in languages and history. He has taught postgraduate courses in both the United States and Jerusalem, Israel.
In addition to professional articles and texts on chordate neuroembryology, Hawk has authored several works of fiction—historical love stories, science fiction and mystery-thrillers. His titles are not genre-centered, but plot-character driven. Moccasin Trace, a historical novel nominated for the prestigious Michael Shaara Award for Excellence in Civil War Fiction and the Writers Notes Book Award, details the family bloodlines of his serial protagonist in the Moccasin Hollow Mystery Series—murder and mayhem with a touch of romance. Hidden Chamber of Death, the first book in the mystery series, was followed by Book 2, Westobou Gold and his latest, Book 3, Curse of the Ancients. All have received national attention. The Bleikovat Event was Vol I in The Cairns of Sainctuarie Science Fiction Series followed by Vol II, The Missing Planets. Vol III, Inanna Phantom is in final galleys.
www.hawkmackinney.net
www.amazon.com
www.barnesandnoble.com
~~~~~~~~~~~~~
GIVEAWAY INFORMATION and RAFFLECOPTER CODE
Hawk MacKinney will be awarding a $20 Amazon/BN GC to a randomly drawn winner via rafflecopter during the tour.

Dead Gold is the fourth installment from the Moccasin Hollow Mystery series. It is the first book I have read by Hawk MacKinney. Even though it is the fourth book in the series, I felt it could be read as a stand alone. At least, I did not feel as though I was missing anything or lost by not reading the other books. I enjoyed this story. It was full of adventure, action, mystery and suspense.

I give Dead Gold four stars. I would love to go back and catch up with the others in the Moccasin Hollow Mystery series.