This post is part of a virtual book tour organized by Goddess Fish Promotions. The author will be awarding a $75 Amazon/BN gift card via the Rafflecopter at the end of the page. Click on the tour banner to see the other stops on the tour. 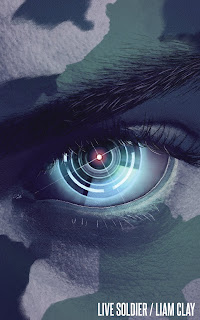 THE APOCALYPSE WILL BE TELEVISED.

You know what they call me.

Camera-eyed killer. Spawn of the ruins. Man who stole a city.

These are not the names of a saint. But every legend has an origin story. And because of what I am, you can experience mine in real-time.

But if you're sick of sanitized heroes... then log in, lose yourself and become the Live Soldier. Because you've never met a marine like me.

The balcony is moving, I realize dimly. No - the entire labyrinth is shifting, rearranging itself into a single great platform. A low dais now occupies its center, a ring of security guards creating a perimeter around it. But these alterations have nothing to do with the drug; robotics and stagecraft are at work here.

Then the world’s color inverts: white turning to black, blue become red etc. I’ve barely adjusted when direction follows suit, and now everything is upside down. Oh crap, this will be the Anex, how much did she -

A (to me) golden clad figure floats up (and therefore down) from nowhere, until her bare feet make contact with the dais. Fantastically tall and smooth cheeked with flint-grey eyes, purple hair pulled back from a sharp widow’s peak. Letiva made young again.

“Welcome,” she says, “to the newly completed set of my upcoming feature!”

The crowd is enthralled, but the Ladder is positively smitten. He takes a step in her direction, but his legs aren’t cooperating and - more distressingly - he has begun to emit a high pitched mechanical whine. I think it’s a hallucination at first, but the crowd can hear it too. Everywhere I look people are clapping hands over their ears, backing away from the Ladder as he careens straight for Letiva. Her security detail closes in -

- and I’m blown off my feet. Everything goes black, shifting abruptly to blue, a deep bass roar accompanying. Now I’m falling, spinning like a top, until an impact hits me with a façade of deep, gutsy red. This holds for some time, fading gradually into pearly white unconsciousness. 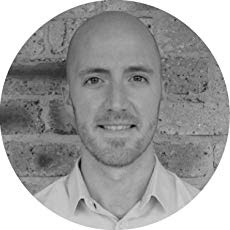 Liam is a Canadian who recently moved to Australia after getting kicked out of England for apologizing too much. He works on the commercial side of design agencies as a job, where his seething jealousy of the creative staff boils over into writing.