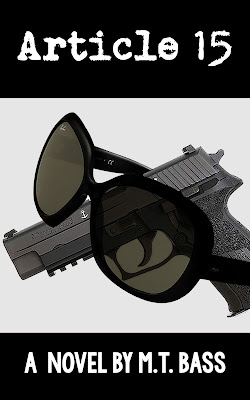 “She was one in a million…and the day I met her I should have bought a lottery ticket instead.”

Griffith Crowe, the "fixer" for a Chicago law firm, falls for his current assignment, Helena Nicholson, the beautiful heir of a Tech Sector venture capitalist who perished in a helicopter crash leaving her half a billion dollars, a Learjet 31, and unsavory suspicions about her father's death. As he investigates, the ex-Navy SEAL crosses swords with Helena’s step-brother, the Pentagon’s Highlands Forum, and an All-Star bad guy somebody has hired to stop him. When Griff finds himself on the wrong side of an arrest warrant he wonders: Is he a player or being played?

Lawyers and Lovers and Guns…Oh, my!

She was one in a million…and the day I met her I should have bought a lottery ticket instead.
Blonde, slim and well-built, of course, her eyes were darkly blue which, when unsheathed from behind her Jackie Ohhs, glinted like gun metal at twilight.
I noticed when we first met.
I ignored it after the first time we made love.
I caught it again as she testified against me.
I suppose, I’ll just never learn. 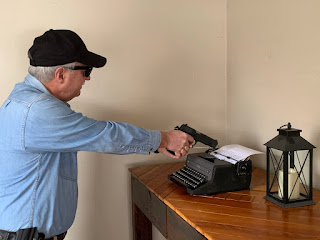 M.T. Bass is a scribbler of fiction who holds fast to the notion that while victors may get to write history, novelists get to write/right reality. He lives, writes, flies and makes music in Mudcat Falls, USA.
Born in Athens, Ohio, M.T. Bass grew up in St. Louis, Missouri. He graduated from Ohio Wesleyan University, majoring in English and Philosophy, then worked in the private sector (where they expect “results”) mainly in the Aerospace & Defense manufacturing market. During those years, Bass continued to write fiction. He is the author of eight novels: My Brother’s Keeper, Crossroads, In the Black, Somethin’ for Nothin’, Murder by Munchausen, The Darknet (Murder by Munchausen Mystery #2), The Invisible Mind (Murder by Munchausen Mystery #3) and Article 15. His writing spans various genres, including Mystery, Adventure, Romance, Black Comedy and TechnoThrillers. A Commercial Pilot and Certified Flight Instructor, airplanes and pilots are featured in many of his stories. Bass currently lives on the shores of Lake Erie near Lorain, Ohio.

Who has influenced you the most to become an author?

I’ve had a lot of help along the way, but the true enabler for my…addiction, shall we say, was Robert Flanagan, a novelist  (Maggot) and poet who was my professor at Ohio Wesleyan University. He agreed to take me on as a creative writing “project” for my English Major. Under his tutelage I achieved some pretty good success, winning several awards from the English Department there.  And even though that recognition was for my work in verse (I was striving to become a better songwriter), when I turned to fiction after I found myself all alone out in the middle of the real world, his influence—kind of like Adam Smith’s “Invisible Hand”—was even greater. I get kind of shark-like at times: always swimming forward. But when I look back on it all, I realize how much I owe Mr. Flanagan a whole boatload of gratitude.

When did you decide to become an author?

William Faulkner famously said, “Don’t be ‘a writer’. Be writing.”  And that’s what I do. I write.  And I don’t recall a conscious decision ever to “become” a writer.  When I was a kid, I was too busy being a kid to even have a notion of seeing my mug plastered on the dust jacket of a hardcover book. After all, there weren’t any Topps Author Cards for me to collect.  What really happened was that words just kind of started oozing up out of me at some point, like the asphalt coming up out of the La Brea tar pits in Los Angeles. And it just hasn’t stopped.

What is your favorite book?

If I had to pick a single favorite, it would be Catch-22. It has been ever since I read it in high school. So much so that I almost pathologically refuse to read any other book by Joseph Heller—especially the sequel, Closing Time. I’ve found it to be a painful truism in life that trying to recreate the magic of a moment is an invitation for bitter disappointment.  For me, the experience of following Yossarian’s epic descent into and escape from the inferno of the Army Air Corps’ deadly bureaucratic madness is like catching and holding and staring at lightning firing off again and again in a bottle. Fighting insanity back with your own brand of insanity seems an eminently sound policy in the face of incorrigible reality.

If Article 15 was on screen, who would you want to play the characters?

I have to admit to a certain estrangement from Hollywood to the point where many of my movie memories are beginning to fossilize.  I’m just not a big comic book/graphic novel fan.  And all the remakes make me feel like I’m having yesterday’s déjà vu all over again.  I guess a young Lou Diamond Phillips (Standing Bear from Longmire) would make a good Griff.  Helena was always inspired by Kathleen Turner in Body Heat.  And I see Lance in the mold of Sam Axe aka Chuck Finley (played by Bruce Campbell) from Burn Notice.  Wew. That was exhausting.  I’m just glad I’m not a casting director.

M.T. Bass will be awarding a $50 Amazon or Barnes and Noble GC to a randomly drawn winner via rafflecopter during the tour.