Review and Giveaway: The Christmas Eve Secret by Elyse Douglas 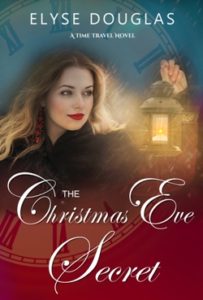 A mysterious man from the past steals the time travel lantern. When Eve and Patrick find it, they destroy it. Eve’s life is shattered. She must return to the past, where secrets await. In the third novel of THE CHRISTMAS EVE series, Eve and Patrick Gantly are living a normal life in 2019 New York, preparing to celebrate the Christmas season. Patrick is taking courses in forensic psychology and Eve continues to work as a nurse practitioner. To their delight, she is three months pregnant. Despite their happiness, Eve is having premonitions that something dreadful is about to occur. Concerned about the future and the safety of their child, she insists that they destroy the time travel lantern. Patrick is more cautious. One afternoon when Patrick is out, a sinister man breaks into the apartment and forces Eve to give him the lantern. In many ways, Eve is relieved the lantern is gone. She hopes they can now live a more normal life. A day later, Patrick shadows a woman who has been staking out the Gantly’s brownstone apartment, and he confronts her. To his and Eve’s utter shock, they learn that Lucy Rose is from 1924 and that she time-traveled with the man who took the lantern. He returned to 1924, but she chose to stay behind. She offers to sell the lantern back to Eve and Patrick, and they reluctantly agree, hoping to keep it out of unscrupulous hands. Convinced that the lantern is a threat to their future happiness, Eve and Patrick decide to destroy it. But the lantern has more power than they could have ever imagined. Once the lantern is destroyed, Eve’s life is completely changed. She must set off on an adventure, in a struggle that will return her to the past, where she will learn the secret of the lantern’s origin and delve into the farthest reaches of her heart.

“If you are a fan of authors such as Nicholas Sparks and Marybeth Whalen, or H.G. Wells or Jack Finney, you need to add this book to your shelves. This is a romantic suspense novel with many dangerous and tense moments. As always, when one travels in time, the concern of consequences and potential changes to history and the future weigh heavily on both the traveler’s and readers’ minds. Those worries added to the atmosphere but were also handled skillfully. I smiled at a certain twist of color. It is a perfect bookclub read.”-Laura’s Interests “The Christmas Eve Letter is a beautiful, poignant story. It is well written and will have you turning the pages eagerly. All of the characters are well thought out, and believably written, together with the well-constructed scenery, that has you feeling as if you yourself have just stepped into the past. The story is unique and moving. It will hold you long after you turn the last page. A perfect Christmas tale of love and hope.”-Whispering Stories “The Christmas Eve Letter is a wonderful time travel book and one of my favorite books of the year.”--The Book Return Blog

“This book is the perfect vehicle for a movie, and I can only hope that there will be more in the series. This novel is truly as close to perfection as the reader could imagine! 5 Stars!”--My Devotional Thoughts Blog and Reviews “I enjoyed the new characters, an update on characters from the first book, and the possibility for more books. If you enjoy time travel-themed novels you will love these books!”--StoreyBook Reviews “I am most impressed that this book did so well as a stand-alone novel. Kudos to the author! If you are looking for a good Christmas book with time travel, give this a go!”--Carole's Bookshelves

That night neither Eve nor Patrick felt like eating.  They ordered Chinese takeout and sat in the living room, paper plates in their laps, the food half eaten.  Patrick was in a dark mood and Eve fought depression.  Now that the lantern was gone, she should have felt lighter, but she didn’t.  There was nothing pleasant or light about what had happened.
“Did he leave any clues at all?” Patrick said, knowing he was repeating himself.
“No, Patrick.  I told you.  Except for the slang and his vintage coat and hat, he didn’t say anything or do anything that suggested who he was, or where he came from.
Patrick laid his plate aside and stood up, facing the fire, his hands clasped behind his back.
“Well, he obviously knew who you were and that you had the lantern.  How?  You’re sure Joni hasn’t told anybody?”
“No, I told you.  Joni has never told anyone.  She had no idea who the man was.  She was scared to death, so scared that she’s going to stay with a girlfriend tonight.”
Patrick turned to Eve; his eyes warm on her.  “You did the right thing.  I’m so glad you gave him the lantern without resisting in any way.”
“What could I do?  He had a gun pointed at me.”
Patrick went to her, stooped, and kissed her on the forehead.  “I’m sorry you had to go through that.  He obviously waited until I wasn’t around.  No telling how long he’s been watching us.”
Patrick turned to Georgy Boy, who was lying asleep near the fireplace.  “Too bad we don’t have an attack dog.”
“It’s not his fault.  Georgy Boy’s an orphan.  He had a bad puppy-hood until I rescued him.”
“How’s the baby?”
“The baby is fine.  I kept as calm as I could, taking a lot of deep breaths.”
“I’m sorry, Eve.  I’m sorry we didn’t get rid of the lantern the other day when you wanted to.”
“Yes, well, I’ve been thinking about that.  What would that man have done if I told him we’d bashed it up and tossed it into the river?  He probably wouldn’t have believed me, and then who knows what he might have done.”
“Good point.  I hate to say it but a proverb from my old Da comes to mind.”
Eve tilted her head, giving him a faint smile.  “I figured it was about time for one of your Da’s proverbs.  Okay, out with it.”
Patrick arched an eyebrow.  “There is misfortune only where there is wealth.”
“And what does that mean with regard to us, and about what just happened?”
“It means that the lantern made us wealthy in many ways.  Remember, not only did it bring us together and save my daughter, Maggie, but it also brought you over five million dollars from John Allister Harringshaw.”
Eve looked away into the fire, watching the play of the orange flames. “So maybe it’s all over now.  Maybe now we can finally get on with our lives and forget the whole thing. Most of me is relieved.”
Patrick stepped behind her and began massaging her shoulders.  She shut her eyes and hummed out pleasure.
“That feels so good.”
“You’re as tight as a drum, Mrs. Gantly.  Where do you want my hands to go?”
“Everywhere… I hope I can sleep tonight.”
“Let me give you a massage.”
They were silent for a time, as Patrick worked her neck and shoulder muscles.  She began to relax, her eyes growing heavy.
“Eve…”
She mumbled out a “What?”  And then “Oh, yes, right there.  Stay there for a while.”
Patrick was thinking aloud.  “If that rogue time traveled from the past to 2019, then he must have used the lantern from the past, right?  Because we both know that the lantern never travels back in time, it stays in the time it’s in.  The lantern in the present, stays in the present.  The lantern in the past, stays in the past.  So, where did our scoundrel find the lantern in the past, and how did he know he could time travel with it?  And how did he know who we are, where we live and that we had the lantern that he needed in order to return to his own time?”
Eve leaned her head back to look at her husband.  “So many questions.” 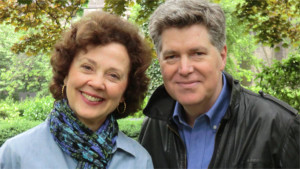 Elyse Douglas is the pen name for the married writing team Elyse Parmentier and Douglas Pennington. Elyse grew up near the sea, roaming the beaches, reading and writing stories and poetry, receiving a master’s degree in English Literature. She has enjoyed careers as an English teacher, an actress and a speech-language pathologist. Douglas has worked as a graphic designer, a corporate manager and an equities trader. He attended the Cincinnati College Conservatory of Music and played the piano professionally for many years. Website: www.elysedouglas.com Twitter: https://twitter.com/douglaselyse Facebook: www.facebook.com/elyse.authorsdouglas

This giveaway is for the winner’s choice of one print or ebook copy of the book. Print is open to the U.S. only and ebook is available worldwide. There will be 3 winners. This giveaway ends November 29, 2019, midnight pacific time. a Rafflecopter giveaway 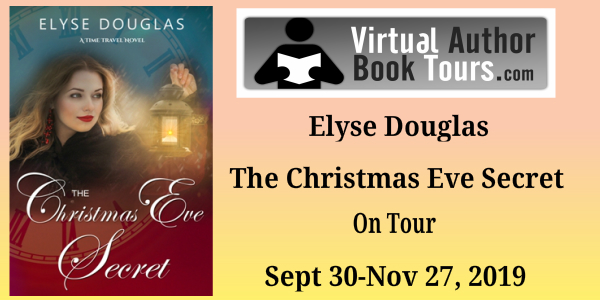 The Christmas Eve Secret is the third installment from  Elyse Douglas’s time travel romance series, The Christmas Eve. I recommend to readers that it would be best to read the series in order for easier reading. I have had the pleasure in reading the other books, and this one does not disappoint. It was great catching up with Eve and Patrick. There is a huge twist in the beginning that I did not expect and that kept me going until the end to find what where they would end it.

I give Christmas Eve Secret a well-deserved five plus stars. Do not let the book and series title fool you, it is one of those stories you want to read all year long. I highly recommend it!