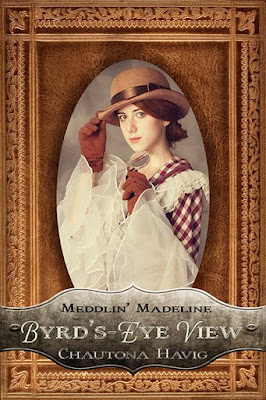 If everything looks so perfect, how does she know it’s all wrong?

Madeline just wanted to learn to develop her own pictures. It seemed an innocent enough pastime until she sees something in the developer’s tray that piques her meddlesome curiosity.
Now she’s on the hunt for clues to spare a man’s life, and she might just land her father in hot political waters while she’s at it.

The fifth book in the Meddlin’ Madeline Series, Byrd’s Eye View sees Madeline back at home in Rockland and determined to stay out of trouble, although that’s not likely to happen, is it? 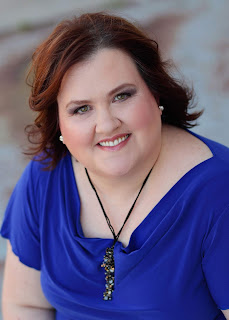 Chautona Havig lives in an oxymoron, escapes into imaginary worlds that look startlingly similar to ours and writes the stories that emerge. An irrepressible optimist, Chautona sees everything through a kaleidoscope of It’s a Wonderful Life sprinkled with fairy tales. Find her on the web and say howdy—if you can remember how to spell her name.

It’s Like This Book Didn’t Want to Be!
It’s an hour and a half from my mother’s old house in Missouri to the Springfield airport—a perfect distance for plotting out a book. So, when I had to drive back to swap out rental cars, I decided to work on the early 2020 books.  Up first… Madeline #5.
Often when I’m plotting out a new book, the first few minutes are kind of jumbled messes as I consider this plot point or that and get into a work flow, and that day was no exception.  However, by the time I hit the interstate again, I’d done it. Madeline would learn how to develop pictures in this one. The plot would revolve around that new skill.
By the time I hit Noel, I’d really come up with a cool book idea. I was so excited.  You have no idea. Then, as I passed Noel on my way to the hospital in Gravette, Arkansas, I stopped on the side of the road so I cold turn off the voice recorder and start working on another book.
The recorder was off.  All my “brilliant ideas” were gone.
Sometimes, I wish I was a crier. It would have been appropriate right there.  Just sayin’.
Determined to record the ideas all over again before I forgot them, I started the first few things, watching the recorder bars rise and fall with the inflection of my voice. It worked great.
The only problem was I couldn’t remember anything I’d come up with.  Photography. That was it.
That’s when I called my friend and wailed.
Look, it had been a hard couple of weeks, a rough day, and now this. But, complaining about it offered enough catharsis that by the time I went back to Springfield the next week, I was able to record most of it again.  Some of it was actually better.
Little hint:  it usually is the second or third round of ideas.
By the time I’d finished, I knew what happened and what havoc it would cause, but not to whom or why. Enter Clark.
You know, the guy who made me split the first book into two separate books (you can read about that HERE), and the guy who tried to make things get really gruesome in book four (you can read about that HERE—halfway down the pageish—and be assured that I didn’t do it).
So, just as I was getting into Byrd’s Eye View, Clark and I met up at Denny’s to figure out how to make all the elements I had work.
My one issue became another one. Why became totally different from anything I’d considered. Who became a great reason for it to make things tough on Madeline’s father, and a previous thing I’d thought was a bit excessive became more so… and more believable at the same time.  How cool is that?
There was still one problem, though.
I wasn’t done with the book I needed to finish before I could immerse myself in this one.
And this book needed to be done yesterday.
Look, I had actually considered not doing this book until later in the year. For a few minutes, I wished that I had. But Madeline always comes out in February/March and I’d kind of like to keep it that way.  So…
Despite losing my notes, having plotter’s block, having Clark upset everything I’d planned and making it better… again.  It’s here.  And I think it’s my favorite one yet.  Who am I kidding?  Of course it is! 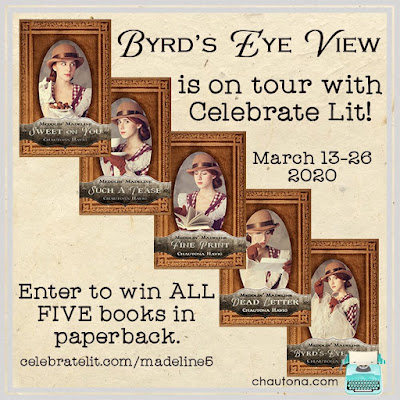 To celebrate her tour, Chautona is giving away the grand prize package of all five paperbacks in the Meddlin’ Madeline Series!!
Be sure to comment on the blog stops for nine extra entries into the giveaway! Click the link below to enter.
https://promosimple.com/ps/f791/byrd-s-eye-view-celebration-tour-giveaway
Posted by Amybooksy at 1:00 AM