Blog Tour and Giveaway: Landing By Moonlight by Ciji Ware

Landing By Moonlight: A Novel Of WWII

Based on the lives of a small group of American women secret agents working for British intelligence parachuting into France to help the Resistance during WW II. The year is 1942, and American secret agent Catherine Thornton has no idea whether she will be dropped behind enemy lines in an inflatable raft launched from a submarine or be flung through the moonlit sky from a low-flying British Halifax. Either way, the young embassy wife and erstwhile journalist knows there’s always the chance she’ll be picked off by German sharpshooters, although nothing in her imagination prepares her for the trial-by-fire to come. Only she understands why she volunteered for such “unwomanly warfare” and the secret reasons she joined a handful of female American spies destined to risk her gilded life on French soil–yet former Vichy diplomat Henri Leblanc, code name Claude Foret, thinks he knows the answers. As Catherine’s missions grow more harrowing each day, and she fears she’s fallen in love with a captured fellow agent, the German SS begin to close in on the world of Madame “Colette Durand” and her Résistance network embedded in coastal cities along the French Riviera—an exposure that could threaten the Allied victory itself. And hanging in the air like a half-opened parachute is the life-or-death question: Who is the betrayer and who will be betrayed in this, their finest hour?

Ciji Ware is a New York Times and USA Today bestselling author of twelve works of historical and contemporary fiction, two of nonfiction, and was short-listed for the Willa [Cather] Literary Award for Historical Fiction in 2012. A graduate of Harvard University in History, she is an Emmy-award winning television producer, a Dupont awardee for investigative journalism, and an American Bar Association winner of a Silver Gavel for her magazine work. For eighteen years, she was a broadcaster and commentator for KABC Radio/TV in Los Angeles. A recipient of Harvard’s prestigious Alumni Award in 2004, Ware was the first woman graduate of the university to serve as President of the Harvard Alumni Association, Worldwide. Ware and her husband, Tony Cook, live in the San Francisco Bay Area.

Follow  the author on Facebook, Pinterest, and Amazon.
Visit her website
Buy the book: paperback and ebook available on Amazon, Barnes & Noble, ibook/Apple, and Kobo.
***
You can enter the global giveaway here or on any other book blog participating in this tour. Visit/Follow the participating blogs on Facebook/Twitter, as listed in the entry form below, and win more entry points! 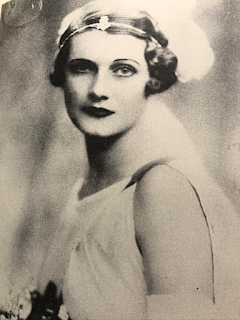 
But she was! Amy Elizabeth “Betty” Thorpe”—the prototype for the lead character in Landing by Moonlight—was the top debutante in America’s capitol in her day. Pregnant at nineteen by a man whose name she refused to divulge, she hastily married a British diplomat twenty-two years her senior whom she soon grew to despise.  She was only too happy to distract herself by taking on embassy intelligence “assignments” as the drums of war grew louder in Europe in the late 1930s.
Before she knew it, she agreed to steal a crucial book of naval codes in the dead of night from a locked safe inside the Washington, D.C. Vichy (German controlled) French embassy.
When I first saw beautiful Betty’s picture and tracked down what was known of her true-life story as an American spy for the British in the lead-up to WW II, I knew I had to continue the theme that runs through most of the twelve novels I’ve published:  “What were the women doing?” I’ve long been obsessed about women’s stories in various historical periods that have been neglected, forgotten, or ignored. 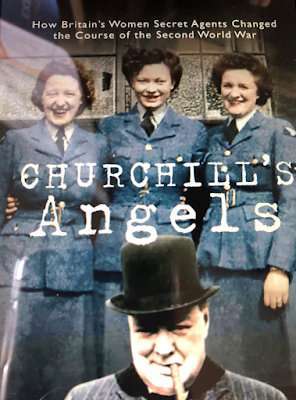 Once learning about Betty’s amazing saga (and, as the former broadcast news reporter that I am), I followed the “breadcrumbs” tracking down the known facts about a handful of other American women who, early in WW II, joined the recently-formed British intelligence organization—the S.O.E. –-the Special Operations Executive. This was the spy agency, a rival of the better-known MI6, devoted to inserting secret agents into France to fight the Nazis.  It was dubbed variously around the London War Office as “The Firm,” “The Baker Street Irregulars,” the “Bureau of Un-Gentlemanly Warfare,” and--when women agents became a part of the S.O.E.-- “Churchill’s Angels.”
The result of all my “nosing around,” as my husband of 43 years calls it, was Book 1, Landing by Moonlight, in my on-going Spy Sisters Series.  It chronicles the daredevil women secret agents parachuted through moonlit skies, or launched from submarines in rubber dinghies and rowed to shore in occupied France between 1940 and 1944.
Betty Thorpe’s clandestine adventures and those of several real-life WW II women secret agents who were dropped behind enemy lines served as the basis for what turned out to be the composite fictional character of Catherine Thornton a.k.a Colette Durand.
Both archival material released in 1995 on the 50th anniversary of the end of WW II, along with personal written accounts of the unusual roles of the very few American women spies in occupied France became a rich source of drama, conflict, and even romance for this author of fiction—particularly focused on women hailing from the United States who have been unsung heroines in WW II for far too many years. 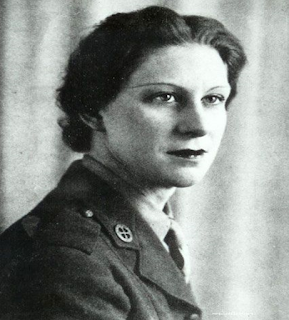 
Book 2 in the Spy Sister Series, Above the Clouds, is my current work-in-progress. It will essentially be based on the life of an American “spoiled child,” from New York who was raised in France and Austria by a British-born mother and the young woman’s late, French-American father. As a teenager, she hated her stepfather and the business interests that had drawn him into making “deals with the devil” in Hitler’s Germany at a time when crowds there were bellowing anti-Semitic chants, much to his stepdaughter’s horror.
Rebelling against her family just as Nazi troops were invading France, she first signed up to drive Red Cross ambulances for the American Hospital in Paris. Very soon, she fled to Britain to join the S.O.E. because she spoke passable French and was a crack skier--both required talents for agents assigned to the snowy mountains of the French Alps. 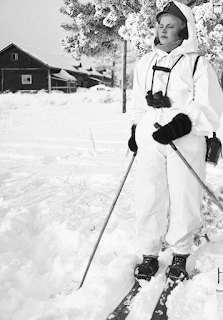 Women in White on skies

Like the woman in this picture, my newest heroine (who makes a brief appearance in Landing by Moonlight as the irrepressible Vivier Clarke), crash lands in a RAF plane whose wing scrapes the side of a church steeple in the middle of the Loire Valley, tossing her face down into the mud of war-torn France. She picks herself up and heads to her dangerous assignments as a courier for a Resistance network based in some of the same Alpine resorts like Chamonix and Val d’Isere where a younger Viv had once skied down their slopes with carefree abandon. 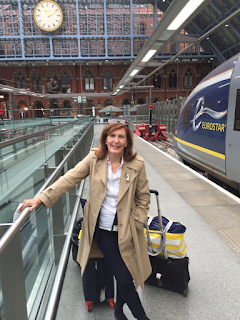 After three research trips to France (and another one planned for June of this year), it’s been thrilling for me to retrace the steps of these intrepid American women secret agents, weaving fact into fiction to recreate a time fraught with danger and daring-do, when the mantra of these women had to be: “Trust No One.”  These woman warriors fought like tigresses to survive amidst terror, betrayal, and physical danger—and still find love, if only for the moments they had left before risking their lives on yet another secret mission.
My hope is that the romantic thriller, Landing by Moonlight, along with its forth-coming Spy Sisters companions, will touch the hearts of readers in the way these genuine heroines have touched mine.

Tweeting about the giveaway everyday of the Tour will give you 5 extra entries each time! [just follow the directions on the entry-form] Global giveaway open to all 5 winners will receive a copy of this book

Landing by Moonlight: A Novel of WW II is another great read by Ciji Ware. It is based on true historical events during the second world war. I love that the main character is a female secret agent. Catherine gets caught up in a lot of action and adventure. I admired her bravery and courage. Readers need to get ready to hold on their seats because this book is one thrilling ride. I could not help to keep turning the pages continuously. I had the whole book read in one sitting. The author did a great job with the historical details that made me feel like I was part of the story.

I am giving Landing by Moonlight a very well deserved five plus stars. I highly recommend it for readers who enjoy World War II era novels. I loved it! I look forward to reading more by this author in the future.

Save
Posted by Amybooksy at 1:00 AM