Join Us for this Series Spotlight Tour from Mar 16 to April 3, 2020!
SERIES DETAILS:
Series Title:  Henrietta and Inspector Howard by Michelle Cox
Category:  Adult Fiction (18+)
Genre:  Historical Mystery
Publisher:  She Writes Press
Release dates:   April 2016; April 2017; April 2018; April 2019; April 2020
Tour dates: Mar 16 to April 3, 2020
Content Rating: R: Books 1-2 do not have any sex scenes, though there is sexual reference, Books 3-5 do have explicit sex scenes (tasteful). There is periodic swearing and violence, but not a lot. There are some dark themes (though not graphic examples) of suicide, prostitution, mob involvement, rape, drinking, homosexuality. 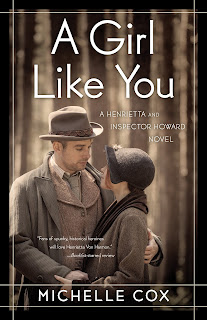 A GIRL LIKE YOU: Beautiful Henrietta Von Harmon works as a 26 girl at a corner bar, Poor Pete’s, on Chicago’s northwest side. It’s 1935, but things still aren’t looking up since the big crash and her father’s subsequent suicide. Left to care for her antagonistic mother and seven younger siblings, Henrietta is persuaded to take a job as a taxi dancer at a local dance hall. Henrietta is just beginning to enjoy herself, dancing with men for ten cents a dance, when the floor matron suddenly turns up murdered. The aloof Inspector Clive Howard then appears on the scene, and Henrietta unwittingly finds herself involved in unraveling the mystery when she agrees to go undercover for him in a burlesque theater where he believes the killer lurks.

Even as Henrietta is plunged into Chicago’s grittier underworld, she struggles to still play the mother “hen” to her younger siblings and even to the pesky neighborhood boy, Stanley, who believes himself in love with her and continues to pop up in the most unlikely places, determined, ironically, to keep Henrietta safe, even from the Inspector if needs be. Despite his efforts, however, and his penchant for messing up the Inspector’s investigation, the lovely Henrietta and the impenetrable Inspector find themselves drawn to each other in most unsuitable ways. 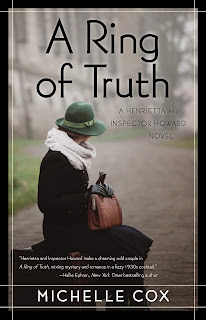 A RING OF TRUTH: In this second book of the series, Henrietta and Clive delightfully rewrite Pride and Prejudice―with a hint of mystery!

Newly engaged, Clive and Henrietta now begin the difficult task of meeting each other’s family. “Difficult” because Clive has neglected to tell Henrietta that he is in fact the heir to the Howard estate and fortune, and Henrietta has just discovered that her mother has been hiding secrets about her past as well. When Clive brings Henrietta to the family estate to meet his parents, they are less than enthused about his impoverished intended. Left alone in this extravagant new world when Clive returns to the city, Henrietta finds herself more at home with the servants than his family, much to the disapproval of Mrs. Howard―and soon gets caught up in the disappearance of an elderly servant’s ring, not realizing that in doing so she has become part of a bigger, darker plot.
As Clive and Henrietta attempt to discover the truth in the two very different worlds unraveling around them, they both begin to wonder: Are they meant for each other after all? 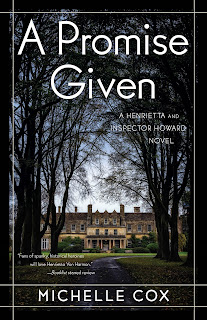 A PROMISE GIVEN: This third book in the Henrietta and Inspector Howard series provides a delightful romp through the English countryside and back.

Anxious to be married, Henrietta and Clive push forward with their wedding plans despite their family differences, made worse now by Oldrich Exley’s attempts to control the Von Harmons. When the long-awaited wedding day arrives, there is more unfolding than just Clive and Henrietta’s vows of love. Stanley and Elsie’s relationship is sorely tested by the presence of the dashing Lieutenant Harrison Barnes-Smith and by Henrietta’s friend Rose―a situation that grows increasingly dark and confused as time goes on.

As Clive and Henrietta begin their honeymoon at Castle Linley, the Howards’ ancestral estate in England, they encounter a whole new host of characters, including the eccentric Lord and Lady Linley and Clive’s mysterious cousin, Wallace. When a man is murdered in the village on the night of a house party at the Castle, Wallace comes under suspicion―and Clive and Henrietta are reluctantly drawn into the case, despite Clive’s anxiety at involving his new bride and Henrietta’s distracting news from home.
Delicately attempting to work together for the first time, Clive and Henrietta set out to prove Wallace’s innocence, uncovering as they do so some rather shocking truths that will shake the Linley name and estate forever. 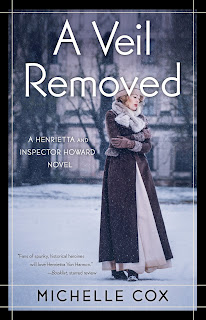 A VEIL REMOVED: Murder is never far from this sexy couple . . . even during the holidays!

Their honeymoon abruptly ended by the untimely death of Alcott Howard, Clive and Henrietta return to Highbury, where Clive discovers all is not as it should be. Increasingly convinced that his father’s death was not an accident, Clive launches his own investigation, despite his mother’s belief that he has become “mentally disturbed” with grief. Henrietta eventually joins forces with Clive on their first real case, which becomes darker―and deadlier―than they imagined as they get closer to the truth behind Alcott’s troubled affairs.

Meanwhile, Henrietta’s sister, Elsie, begins, at Henrietta’s orchestration, to take classes at a women’s college―an attempt to evade her troubles and prevent any further romantic temptations. When she meets a bookish German custodian at the school, however, he challenges her to think for herself . . . even as she discovers some shocking secrets about his past life. 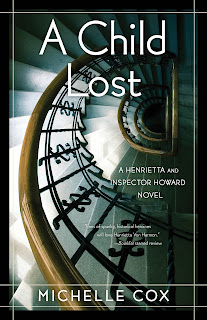 A CHILD LOST: A spiritualist, an insane asylum, a lost little girl . . .

When Clive, anxious to distract a depressed Henrietta, begs Sergeant Frank Davis for a case, he is assigned to investigating a seemingly boring affair: a spiritualist woman operating in an abandoned schoolhouse on the edge of town who is suspected of robbing people of their valuables. What begins as an open and shut case becomes more complicated, however, when Henrietta―much to Clive’s dismay―begins to believe the spiritualist's strange ramblings.
Meanwhile, Elsie begs Clive and Henrietta to help her and the object of her budding love, Gunther, locate the whereabouts of one Liesel Klinkhammer, the German woman Gunther has traveled to America to find and the mother of the little girl, Anna, whom he has brought along with him. The search leads them to Dunning Asylum, where they discover some terrible truths about Liesel. When the child, Anna, is herself mistakenly admitted to the asylum after an epileptic fit, Clive and Henrietta return to Dunning to retrieve her. This time, however, Henrietta begins to suspect that something darker may be happening. When Clive doesn’t believe her, she decides to take matters into her own hands . . . with horrifying results. 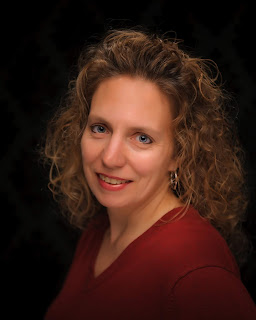 Connect with the Author:

1. Did you always know you wanted to be a writer?
No, not really.  I didn’t ever see myself writing fiction.  I never had the courage to be a writer, though I was a great essayist.  In college, I briefly considered a career maybe as a journalist, but it sounded too scary and difficult.  Believe it or not, I decided to try to be a doctor because I thought it sounded easier than being a writer.  (Turns out, this is might actually be true.)

Eventually, medicine went by the wayside, and I ended up following my real love and got an English Lit degree.  It wasn’t until much later in life, however, that I decided to challenge myself to try to write creatively.
2. Since you came at writing later in life, what was the motivating factor that propelled you?
Oddly enough, it was when my oldest was diagnosed with ADHD, and then shortly after that, my second child was diagnosed with a different type of learning disorder.  It was a bit of a wake-up call for me.  I was a stay-at-home mom, but I had gotten very involved in a number of volunteer positions and committees, which took a lot of my time.  In a guilt-ridden panic, I quit everything across the board in order to have time to help my boys.
It turns out that this knee-jerk reaction may have been a little extreme, however, because getting the kids the help they needed didn’t take as much time as I thought it was going to. So then I was strangely left with a giant glut of time.
My thought was that I could either get a job, go back to volunteering, or . . . perhaps write the novel I always wanted to write. I stewed on this for a really long time, but when four different people from four different parts of my life out of the blue suggested I write a book, I decided it was the sign I was looking for.
3.  What happened next?
I wrote a gargantuan coming of age story set in Chicago in the 1940s.  Turns out it was triple the size of what a normal debut novel should be, so I found it nearly impossible to sell.  After trying for a year, I finally put it in a drawer and decided to start over.  This new project ended up being A Girl Like You, the start of my Henrietta and Inspector Howard series, and I haven’t looked back since.
4.  If you could co-write a book with any author, who would it be?
Wow, that’s hard!  Someone living, I presume?  If so, I guess I’d have to say, Lauren Willig, Beatriz Williams, or Kate Morton.  I really love their books, and I think we have similar styles and themes.
5.  What is your favorite book of all time?
Probably Great Expectations, by Charles Dickens.  I love all of his novels.  I think he’s a master of character and plot twists.  Great Expectations is nearly perfect, in my opinion.  It has everything.