This post is part of a virtual book tour organized by Goddess Fish Promotions. Shauna Alderson will be awarding a $20 Amazon or B/N GC to a randomly drawn winner via rafflecopter during the tour. Click on the tour banner to see the other stopson the tour. 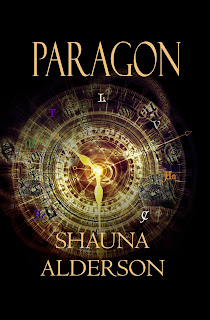 Now that high school is over, Randi just wants to live her quiet life in her little town, but it doesn’t feel right without her friends there. Ever the daredevils, they’ve gone to seek adventure in the capital city of Grandin, and Randi can’t help but feel left behind. Not to mention she definitely can’t stop thinking about that kiss she and Eddy shared before he left.

When Randi discovers a mysterious mark on her skin that matches an illustration in “A Handbook on Paragonhood”, she’s thrown into a world of powerful gods and ancient magic that she thought only existed in the myths. She’ll have to step out of her comfort zone—and into the dangerous streets of Grandin—to find a way to protect herself and the people she loves.

Randi’s not the only one with a secret, though, and she finds herself questioning who she can trust. Randi will have to wrestle with what it means to be a Paragon and how far she’s willing to go to do what’s right.

With the fate of the world on the line, can she live up to being one of the chosen?

Louis comes into view as I round the corner of the restaurant into the simple, well-kept yard. He's facing the other way, holding a wooden staff, not even wearing a coat. I'm about to call out and let him know I'm there, but before I can, he spins in a circle, extending the stick as gracefully as if it were a part of his arm. His movements are soft and flowing as he twists around a large cobbled circle in the middle of the yard. It looks like a gentle dance, but it's evident from the way he maneuvers the stick and guards his torso that it's also a fight.

Louis comes back to a neutral position and bows to an invisible adversary before him. “That was the swan,” he says, making me jump. “And this is the dragon.”

He steps aggressively, each strike hard and fierce. He jabs the staff out before him and twirls, nearly horizontal with it. A few stances later, he accidentally whacks himself in the shoulder with the practice weapon.

He bursts out laughing. “It’s not my best form.” He approaches me while massaging his shoulder. “Good thing you’re not my grandma, or you’d make me practice until I got it right.”

“Me too.” He blinks as a raindrop falls on his cheek. We both turn to the sky as thunder rumbles in the distance. “Looks like it’ll be a downpour.”

About the AuthorShauna Alderson began writing teen fantasy even before she was a teen. After she “grew up", she completed creative writing courses (and a BA in Development Studies) at the University of Calgary. When not reading or writing, she can usually be found teaching ESL, composing on the piano, creating art, or volunteering abroad. She also enjoys dessert, Studio Ghibli films, and being the silliest person she knows.

March 31:
1: Our Town Book Reviews
2: Hurn Publications
3: All the Ups and Downs
4: Fabulous and Brunette
5: Books in the Hall
6: Just Books
7: Candrel's Crafts, Cooks, and Characters