This post is part of a virtual book tour organized by Goddess Fish Promotions. Shami Stovall will be awarding a $25 Amazon or Barnes and Noble GC to a randomly drawn winner via rafflecopter during the tour. Click on the tour banner to see the other stops on the tour. 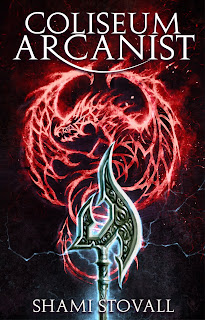 Adventure. Competition. A duel to the death.

While on a journey to the famous city of Thronehold, Volke Savan learns of the Sovereign Dragon Tournament. The massive celebration involves hundreds of arcanists competing for fame and glory, and Volke is determined to win.

Dark forces dwell in the city, however, and rumors of the legendary world serpent spread amongst the shadows. Whoever bonds with a god-like mystical creature will gain magic beyond compare, and the queen’s guards suspect cutthroats will use the chaos of the tournament to hide their plotting.

Unsure of who to trust, Volke investigates the terrible rumors while advancing in the ranks of the tournament. Unfortunately, the true villain may be closer than he realizes…

Continue the Frith Chronicles with the third book, Coliseum Arcanist!

Praise for the Frith Chronicles!

Nothing hurt quite like the sharp beak of a phoenix jabbed straight into my scalp.

I growled a curse as I leapt up into a sitting position on my bed. Was I bleeding? I ran a shaky hand through my disheveled black hair and flinched when I grazed the tiny puncture wound. Some blood, but not much.

“My arcanist wanted to know if you were ready to train.”

“Yeah. Just give me a moment.”

The stinging pain removed all grogginess. I couldn’t go back to sleep now, even if I wanted to. After another deep breath, I peered through the open window. The sun had yet to rise. The purple hue of the sky, dotted with a handful of stars, meant we still had an hour before dawn.

“He’s been determined to work hard ever since he escaped Calisto’s pirate ship.” Forsythe tilted his head from side to side. “And you did say you would train with him whenever he asked.”

Although it was dark outside, Forsythe illuminated my room. A gentle glow radiated from beneath his scarlet feathers, like his body was made of flame. The rest of him resembled a large heron with delicate features, including a long neck and a pointed beak. His gold eyes stayed fixed on me as I flung my legs over the side of the bed.

I loved phoenixes, but every time they moved around, soot fell from the smolder of fire hidden beneath their feathers. A trail of it led from the windowsill to my bed.

About the Author: Shami Stovall is a multi-award-winning author of fantasy and science fiction, with several best-selling novels under her belt. Before that, she taught history and criminal law at the college level, and loved every second. When she’s not reading fascinating articles and books about ancient China or the Byzantine Empire, Stovall can be found playing way too many video games, especially RPGs and tactics simulators.