Blog Tour and Giveaway: Footprints on Her Heart by Tabitha Bouldin 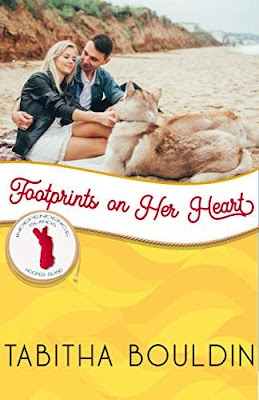 Book: Footprints on Her Heart

He’s saving the world, one animal at a time.

Trent Raines’ opinion, happily ever after has four paws and doggy breath. He spends his days isolated at the shelter, taking care of animals. Especially now that romance seems to be spreading across the islands faster than fleas in summer.

She lives a safe life behind the camera lens.

Kara Parker’s job at the animal shelter keeps her too busy to worry about romance. Sure, the boss is cute and all, but her introverted nature is perfectly happy as a photographer and website designer, thank you very much.

Even a quick trip to the mainland to retrieve a truckful of animals won’t change their minds.

Or so they think.

As Trent comes to understand Kara, he discovers there’s more than meets the eye in his quiet employee. Together, they plan a Christmas adoption festival that’s certain to empty the animal shelter in record time. Until a blast from Trent’s past puts all the animals in danger.

Sure, Trent and Kara are fine on their own, but they’re even better together.

What will it take for these soulmates conquer their fears and rescue the animals before it’s too late?

Footprints on Her Heart continues the Hooper Island stories of the Independence Islands Series featuring five islands, six authors, and a boatload of happily-ever-afters. 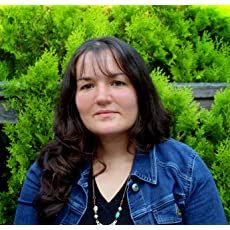 Tabitha Bouldin has a bachelor’s degree in creative writing/English from Southern New Hampshire University. She is a member of American Christian Fiction Writers (ACFW) and has been writing since 2015. When she’s not homeschooling her kids, you’ll find her curled up with a book. Tabitha’s genre of choice is Contemporary Christian Romance which she describes as: Adventure with heart.

I love animals. Always have. I was the kid who always brought home the injured animals and tried to make them better. I am the adult who feels guilty for walking by a hungry cat without feeding it.

When I write, those animal-loving tendencies come out. My characters will rescue animals, care for them, and love them unconditionally. My contributions to the Independence Islands are no different. When it began, I knew I needed a pet groomer, and the animal shelter developed from Mel’s love of animals. That’s when Trent showed up.

Trent walked onto the page as Mel’s partner in founding the animal shelter, Forever Pals, but I didn’t know he wanted his story told until several months after I started writing the series. I tried putting him off, but Trent was having none of that. He’s a bit overzealous and ready to share his love story with you, even if he’d rather I didn’t tell you about his troubled past.

The more I dove into Trent’s story, the more I realized he’s the kind of guy you’d call in the middle of the night when a stray dog shows up in your backyard. He doesn’t care. He’d upend his entire life to care for the animals, and he loves each one instantly, no questions asked. People…not so much.

I had the best time writing this story. Footprints on Her Heart is one of those books that I fell in love with from the very beginning. The story put itself on the page, all I had to do was be the engine and let it come to life. Those are my favorite. I wish every book came as easily as Footprints. Even though that isn’t the case, I’ll always hold this one as a dear friend. Kara and Trent make such a cute couple that I think they need to make an appearance in every island book I write from here on out.

By the Book, December 10

For Him and My Family, December 10

Because I said so — and other adventures in Parenting, December 14

She Lives To Read, December 18 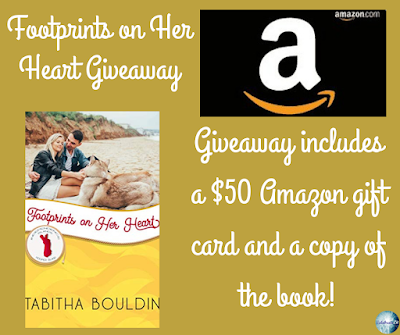 To celebrate her tour, Tabitha is giving away the grand prize package a $50 Amazon gift card and a copy of the book!!

Footprints on Her Heart is the fifth book from the Hooper Island. I have enjoyed the previous books in the series and this one is no different. Tabitha Bouldin has written a delightful story. I enjoyed spending time on this island with Kara and Trent. I loved their chemistry. I felt like Kara was one that I found to be relatable and understand her. I had to keep reading to see how it would end for her, Trent and the animals.

I am giving Footprints on Her Heart four and a half stars. I recommend it for readers who enjoy sweet and clean romance. I am looking for the next installment from the Hooper Island series, Carolyn Miller’s Reclaiming Hope.

I received a digital copy of Footprints on Her Heart from the publisher, but was not required to write a positive review. This review is one hundred percent my own honest opinion.