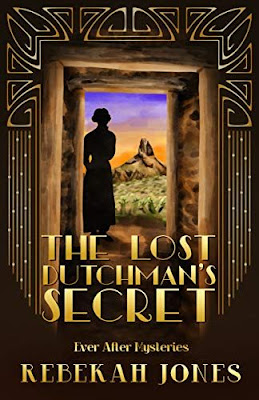 There’s a deadly secret in them thar hills—and gold, or so they say.

Deeply in debt to a wealthy local, Charles Sinclair, Dorothy Hodges’ father finally promises she’ll pay and in gold, no less. If only Dorothy could take to take the promises he spins out of thin air and turn them into that gold, all would be well.

With the help of a strange, rumpled man, Dorothy does manage to bring payment to one of Sinclair’s sons only to discover it won’t pay off the debt. Will the next payment be enough?  The next?

When Charles Sinclair ends up dead, Dorothy is the obvious prime suspect, but Sinclair’s son isn’t so certain. Together they work to clear her name and find the real murderer of the Superstitions, but will they find the answers buried in those hills?

Find out in this next book in the Ever After Mysteries, combining beloved fairy tales and mysteries. The Lost Dutchman’s Secret offers a retelling of “Rumplestilskin” that requires more digging than a miner searching for The Lost Dutchman Mine. 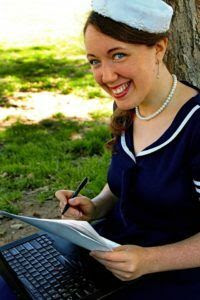 Rebekah Jones is first and foremost a follower of the Living God. She started writing as a little girl, seeking to glorify her King with her books and stories.

Rebekah is an old soul in a young body (she’s not 12 —honest!) While her exact age is classified, her interests are not. Among them are reading a variety of books, singing, playing, and composing music, studying all manner of subjects, nannying an adventurous group of youngsters, and, of course, writing her books, poems, articles, and short stories. She writes a wide range of books from gentle children’s adventures to family sagas to murder mysteries.

“They say that no one had ever seen gold ore like it before, neither have they ever since. Except in the possession of Jacob Waltz. His mine had ore of higher value and higher potency than any other mine found in Arizona…”

What if the Miller’s daughter from the tale of Rumpelstiltskin didn’t have to spin gold, but pay it? And because of an enormous debt – that she had no way of knowing the value? And her father wasn’t a miller, but an old miner with a penchant for carving animals while living in the Arizona desert? And what if, for her pains, she found herself mixed up in a murder?

And what if, somehow intermixed with this poor young woman and her troubles, came the legend of the Lost Dutchman’s Goldmine?

If you don’t know about the legend of that lost mine, you should. Or I think that you should. It’s a real legend as old as the 1860’s. Except, it wasn’t lost when Jacob Waltz went bragging about it. That came later.

The mountains that house the legend are magnificent. When a friend of mine came to visit me, she and I went to explore the area around the Superstition Mountains, as well as a part of the mountains themselves. Standing in a forest of cacti and brush, the jagged rocks and sharp peaks towered above my head, while a critter skittered unseen. Beautiful isn’t quite a strong enough word to describe it. As we hiked up the mountain, making our way through a myriad of desert plant life, rocks of so many shapes and sizes, and tiny critters, I could picture Dorothy, the miner’s daughter.

The modern structures and buildings in sight, faded in my mind’s eye, and I could imagine the young woman partway up the mountain in 1929, wearing her old, faded dress, and staring out across the valley. We plotted out where her father’s shack would have stood, and I made note of a perfect crevice of rock where she might have sat to think or read. I rather found myself wishing I could live out there myself, even if living in a shack in the heat of the Arizona summer doesn’t wholly appeal to me.

When I finally got in front of my manuscript again, I could see Dorothy’s world so clearly, I can only hope I managed to capture it in the book itself. I doubt if I could have captured the beauty of those mountains in words, the sight of them as they changed colors in the sunset, or the glowing starry sky above them after dark.

As for the Lost Dutchman’s Goldmine, I would be lying if I said I didn’t entertain fantasies about exploring the mountains to discover it, but we certainly did not go that far into the mountains. Besides, it was June in the Arizona desert. One does not blindly venture into the mountains on such an errand in such a time of year, unless one has a death wish. It’s rather fun to imagine though. Perhaps one day, I can go on a search – though I confess, I doubt it.

As for the book, I won’t say whether that lost goldmine is discovered or not. I’ll leave that for a reader to discover for themselves.

For Him and My Family, December 22

For the Love of Literature, December 22

Through the Fire blogs, December 30 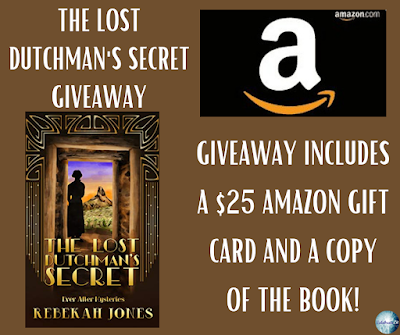 To celebrate her tour, Rebekah is giving away the grand prize package of $25 Amazon gift card and a copy of the book!!

The Lost Dutchman's Secret is the fifth installment from the multi author series, Ever After Mysteries. It is my first introduction to author Rebekah Jones’ writing. I thought it was a pretty good read. I enjoyed the mystery, suspense and history.  I was hooked with Dorothy’s story from the start and it held my attention all throughout. I was at times on the edge on my seat wondering what was going to happen next.

The Lost Dutchman's Secret is getting four stars from me. I recommend it for readers who enjoy reading clean historical suspense. I look forward to read the next installment from the Ever After Mysteries, Chautona Havig’s The Nutcracker's Suite. I would love to read more by Rebekah Jones, as well.

I received a digital copy of The Lost Dutchman's Secret from the publisher but was not required to write a positive review. This review is one hundred percent my own honest opinion.