Blog Tour and Giveaway: The Next Fithian by Rick Barry 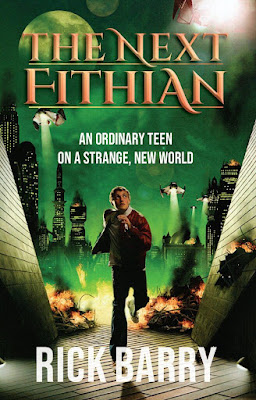 Book: The Next Fithian

Was this a new life — or a death sentence?

When Rankin Johnson boards a flight to Israel, he expects an adventure in archeology. But the airplane comes under attack and explodes in midair. Rankin shouts, “God, I’m yours!” Instantly, he’s in some other place. An angel informs Rankin the Lord is pleased to accept his offer. He dubs Rankin “the next Fithian” — a messenger from God, not to Earth, but to planet Zemna in the alternate dimension. What happened to the previous Fithian? “He was killed,” the angel says before vanishing.

On Zemna, Rankin finds a perplexing, violent world. Futuristic technology mingles with primitive ways. Also, a bizarre symbol—the Intersection of All Things—has appeared on his left palm. It’s a tool to aid his mission, but how? Rankin is supposed to share God’s message with this planet. Instead, he becomes a slave. What he really wants is a trip back to Earth.

With the aid of Prahv and Theena, a brother and sister who become his best friends, Rankin escapes. He hopes to fulfill his mission and return home as fast as possible. But now there’s a price on Rankin’s head. More than one Zemnan would rather kill him for the reward than hear what he has to say. 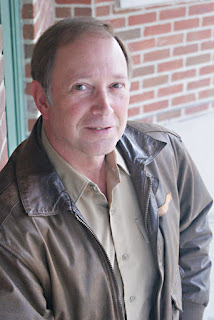 Rick Barry has climbed mountains, jumped from perfectly good airplanes, toured World War 2 battlefields, and visited Eastern Europe over 50 times in Christian ministry. He has a degree in teaching foreign languages and speaks Russian. His fiction and non-fiction have been published by Kregel Books, Focus on the Family, JourneyForth Books, Answers in Genesis, and others. His previous novels are Kiriath’s Quest, Gunner’s Run, The Methuselah Project, and Methuselah Project S.O.S.

Years ago, I received an unexpected phone call. Michael Ross, then-editor of Focus on the Family’s Breakaway magazine, asked me to brainstorm a big, bold adventure for teens: “Maybe fantasy. Maybe science fiction. Maybe both mixed together. I don’t know. Just make it big!”

Such an intriguing challenge! I accepted the assignment and developed a 3-part Christian sci-fi story, The Next Fithian. Those three installments reaped enthusiastic reactions from readers. However, after Part 3, that assignment was done. I moved on.

As years passed, my Fithian characters refused to let me forget them. They kept coming to mind, urging me to create an exhilarating, novel-length adventure for them. At first, I refused. I was giving priority to my novels about World War II airmen. 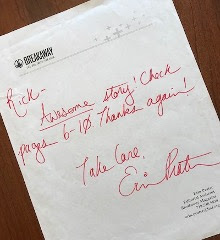 However, whenever I attended homeschool conferences to sign books for shoppers, teens visited my table to talk. What were those teen guys and girls wearing? T-shirts portraying the Avengers, Spider-Man, Captain America, the Hulk … It was obvious what kinds of adventures captivated these young adults. I wondered—what kind of uplifting novel could I pen for Christian fans of the Marvel universe?

In reply, my thoughts jumped back to The Next Fithian, a story brimming with action, adventure, danger, faith—plus a positive role model. This time, I yielded and began brainstorming ways to extend the original 5,400 words into an 80,000-word sci-fi novel with a Christian worldview. I didn’t want simply to create a gripping adventure. I wanted to give readers something unique. I wanted to touch their emotions, to make them laugh, to make them cry, to inspire them, and make them ponder things they had never considered before. I also wanted to transport them to another world where they might see better how to live in our own real world.

Responses from volunteer readers give me hope that The Next Fithian: An Ordinary Teen on a Strange, New World will appeal to diverse readers, both teens and adults. One teen, Kaden E. wrote, “WOW! I just finished the book, and boy was it fantastic!” Another teen, Victoria S. declared, “Rankin is exactly the kind of protagonist we need—he’s mentally, emotionally, and spiritually mature; intelligent; and compassionate.” Adult test reader Marali S. emailed, “I enjoyed this! You must write more!” Another, Jude U., wrote, “I pronounce excellence! The ‘romance’ was sweet and just enough.”

A mix of other test readers gave similar encouragement. So, even though my target audience is young adults, I hope adults will also enjoy it, just as adults enjoyed 17-year-old Katniss Everdeen of Hunger Games fame.

Christian sci-fi might not be your style, but pause and think—maybe you know a young adult who might benefit from such a story?

For Him and My Family, December 16

Because I said so — and other adventures in Parenting, December 20 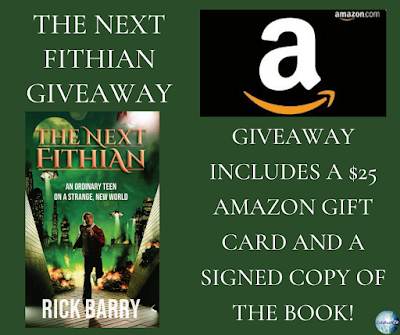 To celebrate his tour, Rick is giving away the grand prize package of a $25 Amazon gift card and signed copy of the book!!

The Next Fithian: An Ordinary Teen on a Strange, New World is the beginning the Next Fithian by Rick Barry. I am not a huge fan of the science fiction genre. However, this one that gives me a good reason why it is a good idea to sometimes to go outside my comfort zone. I thought it was an entertaining read that I could not easily predict. I liked it.

The Next Fithian: An Ordinary Teen on a Strange, New World is getting four stars from me. I recommend it for readers who enjoyed reading fantasy and science fiction. I would be interested in reading the next installment from the Next Fithian series when it releases.

I received a copy of The Next Fithian: An Ordinary Teen on a Strange, New World from the publisher, but was not required to write a positive review. This review is one hundred percent my own honest opinion.