Blog Tour and Giveaway: The Golden Touch by Carole Brown 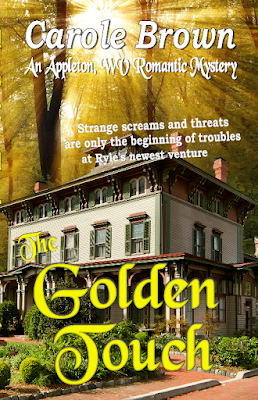 Ryle Sadler stared down at the financial statement lying on his desk. His investment firm had just sent him another record of overwhelming success. Time to sell his share in this stock.

Ryle came from the poor side of the tracks, but that had no bearing on his success in life—which he kept hidden from everyone, especially those in Appleton, West Virginia. But when he buys the local, rundown bed and breakfast, mysterious revelations from beneath the site are suddenly threatening to ruin his good standing with the citizens.

Then along comes Jazzi Sanderson. Jazzi has a reputation of being wild, but Ryle sees more than is on the top layer of this woman. Beneath that tough, wild streak lurks a woman who wants to be loved by the right person, a woman who is tender-hearted and who is just finding out that God is real.

Is Ryle and Jazzi’s worlds too far apart or can their differences help them solve the mystery that lies beneath Ryle’s bed and breakfast? Will the evil person behind it all be able to silence them, or can Ryle’s golden touch prevail in this too?

Besides being a member and active participant of many writing groups, Carole Brown enjoys mentoring beginning writers. An author of thirteen, best selling, award-winniing books, she loves to weave suspense and tough topics into her books, along with a touch of romance and whimsy, and is always on the lookout for outstanding titles and catchy ideas. She and her husband reside in SE Ohio but have ministered and counseled nationally and internationally. She has found that the traveling and ministering has served her well in writing her novels. Together, they enjoy their grandsons, traveling, gardening, good food, the simple life, and did she mention their grandsons?

When beginning the story of THE GOLDEN TOUCH, Book Five of the Appleton, WV Romantic Mysteries, I needed a KEY factor

Here’s what I knew:

But I still didn’t have that thing—that emotion or feeling—the characters were searching for…until I, unknowingly hit upon it. What Jazzi and Ryle were both seeking, although unknown to either, was a place that felt like HOME. The place that makes a person feel content, relaxed and at peace, even when trouble is brewing, even when you’re still searching for that one person who makes the world go ’round for you.

Where was it? Appleton, West Virginia. The small town where everyone knew everyone and their business, or at least assumed they knew. Where friends were friends for life, even when that small town held secrets, trouble and problems.

Ryle, who was rich, innovative and smart, living in a big town and traveling across the country for work was happy, or thought he was. But when he chanced upon Appleton, West Virginia, small, friendly, clean and sometimes a nosy place, but where friends were loyal and ready to help in any way they could, Ryle realized he’d found that spot that felt like home. Adding that to solving the mystery and finding love, was the answer his heart had craved, even though he didn’t know it.

As for Jazzi, wild, beautiful young lady that she was, felt unloved by her adopted parents, and flew the coop from Appleton as soon as she was of age. What she didn’t realize, that instead of blaming others for her unhappiness, it was of her own making. It wasn’t until she returned to Appleton, more mature now, accepting of her own mistakes, and finding a meaning for her life, that her heart grasped the one place that could ever feel like home. Appleton.

For Him and My Family, December 13

Because I said so — and other adventures in Parenting, December 17 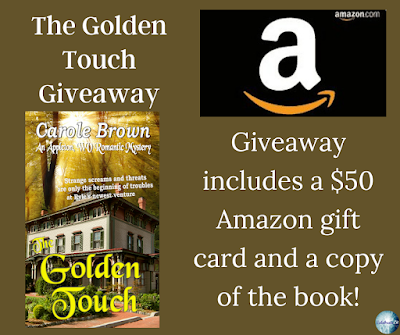 To celebrate her tour, Caryl is giving away the grand prize package of a $50 Amazon gift card and copy of the book!!

The Golden Touch is the fifth installment from Carole Brown’s An Appleton WV Romantic Mystery series. Since I have not read all of the books in the series and believe this one can be read as a stand alone. I enjoyed reading Ryle and Jazzi’s story. I loved that it had a faith element to it. One that is not too overbearing, giving it a realistic feel to it. I liked it.

I am giving The Golden Touch four and a half stars. I recommend it for readers who enjoy reading clean mysteries and romantic suspense. I hope to catch up and the other books I have missed from An Appleton WV Romantic Mystery series and find out what has happened previously.

I received a paperback copy of The Golden Touch from the publisher, but was not required to write a positive review. This review is one hundred percent my own honest opinion.