Blog Tour and Giveaway: The Revelation of Three by Sara M Schaller 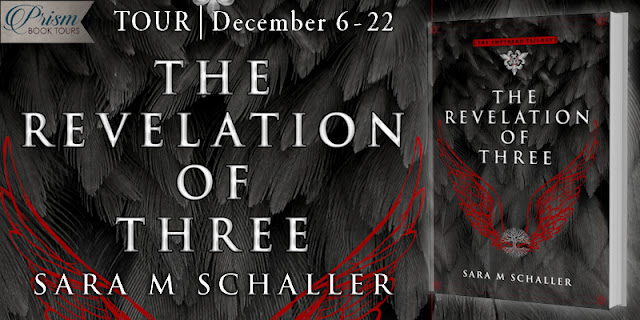 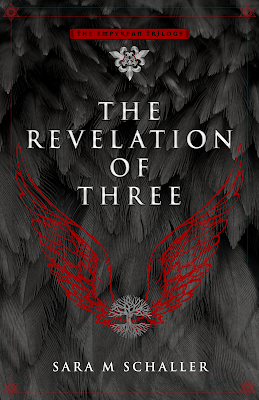 The Revelation of Three
(The Empyrean Trilogy, #2)
By Sara M Schaller
YA Fantasy, Paranormal
Hardcover, Paperback & ebook, 387 Pages
August 3, 2021 by Designs by Seraphim
He thought he was prepared to go to war with the Devil, but what if Satan’s not his true enemy?

Ever since the Devil donned a powerful amulet that allows him to walk the Earth, he has grown weaker—and so has his authority. As a result, mutiny is rising in Hell, and the Devil must fight to remain the king of the underworld. Little does he know, there is much more at stake than his title.

After the death of the nun who raised him and his best friend, Jordan Conway cannot think of anything but finding Sophia and keeping her safe. Luckily, he has a team of archangels on his side, and with their help, the two lifelong friends are reunited. But Jordan didn’t expect the reunion to include another of Sister Helen’s charges—the boy he’d loved like a brother but who had pushed him away, Dane. The three orphans never thought their lives would amount to much, but finding their way back to each other is leading them to finding out who they truly are.

All paths converge when the fourteenth sphere, a celestial object with a power like no other, appears at the Met. The angels must keep it from falling into the wrong hands, and soon, the lines between good and evil blur as they find themselves fighting alongside Satan to prevent the unleashing of a dark and dangerous force hell-bent on taking them all down. But in this world, nothing is as it seems, and the mysterious sphere is possibly the least of their concerns…

Get ready for another adventure as the three friends, and the angels they now consider family, travel the globe in search of a way to save each other—and the world. 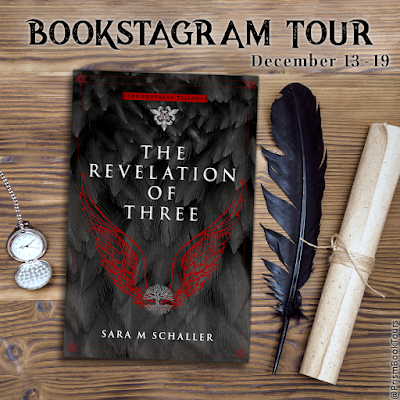 The Genesis of Seven
(The Empyrean Trilogy, #1)
By Sara M Schaller
YA Fantasy, Paranormal
Hardcover, Paperback & ebook, 348 Pages
July 7, 2020 by Designs by Seraphim

Eighteen-year-old Jordan Conway has always wanted to help people, but helping seven archangels to achieve their divine duty was never quite what he had in mind…
When Jordan is entrusted by the head nun of his orphanage to deliver a mysterious backpack to a New York City address, he comes unexpectedly face-to-face with Archangel Gabriel. Their acquaintance fast uncovers a labyrinth of secrets that connect Jordan’s once-normal life to an ancient heavenly prophecy. Now, he must help Gabriel to reunite the archangels before evil forces grow too strong.
Soon, Jordan and Gabriel find themselves on a divine quest across the globe, while deep in the pits of Hell, Satan plots his return to earth. To gain control, however, Satan needs the powerful prophetic objects locked safe inside Jordan’s backpack—and the devil will stop at nothing to get what he wants.
With that notion threatening his only family and the safety of his newfound friends, Jordan must do whatever it takes to protect the ones he loves and help the archangels succeed. If that means sacrificing all he thought he knew to go to war with the devil himself? Bring it on.

Sara M Schaller is a young adult author and publishing professional. She lives in Colorado and works at her local library. Sara likes to write stories for all ages in the fantasy genre, and her writing usually contains elements of speculative fiction and features a large cast of characters. Sara has a Bachelor's degree in English, Art History, and Religious Studies from the University of Denver, and a Master's degree in Publishing from Pace University. You can visit her online at www.saramschaller.com. 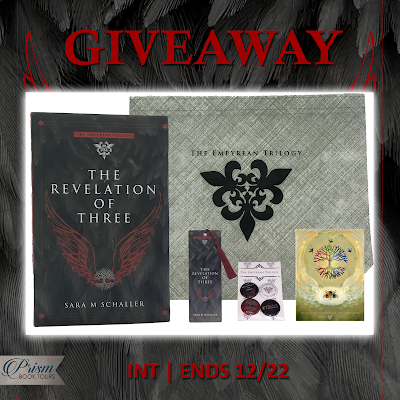 My Review:
The Revelation of Three is the second installment from Sara M Schaller’s The Empyrean Trilogy. I had the pleasure of reading and enjoying the first book, The Genesis of Seven. I thought this was a good continuation of the series. I usually do not like the fantasy but enjoyed reading this one. It was fun catching up with Jordan and Sophia and seeing what was going to happen to them. I could not predict how it would end. It was full of action and adventure that kept me engaged throughout.
I am giving The Revelation of Three four and a half stars. I am looking forward to the next book from The Empyrean Trilogy. I recommend this one for readers who enjoy a good and well written fantasy.
I received a hard cover copy of The Revelation of Three from the publisher, but was not required to write a positive review. This review is one hundred percent my own honest opinion.
Posted by Amybooksy at 1:00 AM