Blurb Blitz and Giveaway: Stop the Clock by Cassie Swindon 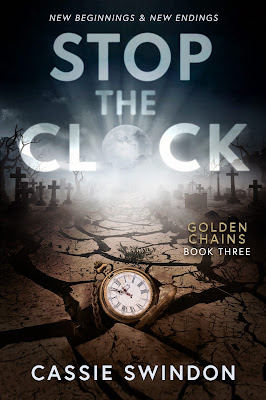 NOTE: The book is free.

Stop the Clock is the finale in the Golden Chains trilogy.

Raelyn Bell has already experienced death and loss. Her family is falling apart at the seams. Despite her fears that Zohaib will hurt the few people she has left, Raelyn is still determined to prove him guilty. But this villain’s hunger for more power threatens to rip her and Kody apart.

To save Raelyn from being captured, Kody Walsh makes a deal with the devil and is dragged across the border to the middle of a rainforest by Zohaib’s hostile force. Commanded to complete unimaginable tasks for the sake of the enemy, Kody’s stakes couldn’t be higher.

Raelyn desperately seeks for any way to rescue Kody and has to decide if she can trust her mother for help after all they have been through. Can they see this journey through without losing their lives—and each other?

Raelyn lit another candle. The flicker added a layer to the dancing light coming from the fireplace. Seducing Zohaib with an email of this gorgeous model might be the only way to plant a virus and access his files. Raelyn refused to let that scumbag capture or sell one more woman.

She turned too fast, sending her new Canon camera flying. The naked woman beside her reached out and grabbed the stand before the tripod toppled to the cabin’s floor.

“It’s fine. I got it.” The model followed Raelyn’s gaze. “Why do you keep glancing at the clock?”

“No reason.” Raelyn handed over an elaborate Venetian mask.

“I need you to wear this over your face.”

“The man we’re doing this for is Italian, and he likes mystery and games.”

The woman clicked her tongue and fastened the mask on, covering most of her face. “Whatever you say…” She took the sheet of paper and angled it closer to the fire. “So, this is the script? … I’m all yours, Zohaib. Where and when can we meet?” She crunched the paper into a ball. “This is crap. I have a better idea.”

“You’ve done this before?” Raelyn asked.

“Manipulated a man? Of course. You haven’t?” 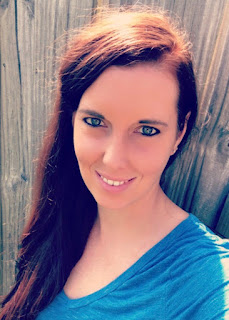 Instead of the boring bio info, here’s some interesting tidbits about the author:

•           Tackled her father for a pair of Michael Phelps’ personal goggles

•           Witnessed a wild horse pack galloping through the Rockies

Cassie Swindon will be awarding a $10 Amazon/BN GC to a randomly drawn winner via rafflecopter during the tour.