Blurb Blitz and Giveaway: Haunted Water by Jo A Hiestand

by Jo A. Hiestand 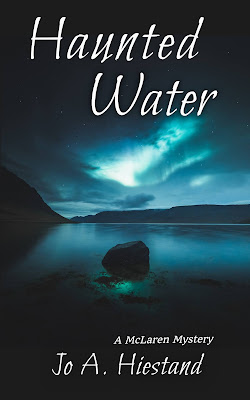 Cameron Rutter drowned two months ago in a lake on a Cheshire moor. Some say a morgen—a spirit who drags men to a watery grave—was responsible. Others say it was the phantom Grey Lady. The police say Gareth Gynne was the guilty one. Whoever—or whatever—killed Cameron needs to be sorted out. And ex-police detective Michael McLaren is asked to do just that.

McLaren’s not keen on delving into the mystery. The accused is the nephew of McLaren’s nemesis, Charlie Harvester. And if there’s one thing McLaren doesn’t want to do is to associate with another Harvester, no matter what generation he is.

Suspects and motives are as tangled as the mere grass. Did a villager kill Cameron, opposed to his crusade to keep the moor in its pristine state? Or did someone previously arrested by Cameron kill him in revenge?

Or was the morgen really responsible?

Can McLaren discover the killer, or will he too become a victim of the haunted water?

“What about a murder weapon? Did the pathologist suggest what it was?”

A rock? McLaren wondered, imagining the shoreline of the mere littered with stones of various sizes. “You mentioned the rough history between you and Cameron.” McLaren rubbed his chin as he thought aloud. The room and the street were deathly quiet, as comes upon places at the end of a workday. Nothing moved on the road; no bird flew or hopped along the grass; no fox or dog barked. McLaren felt as though the village held its collective breath, waiting to hear what Gareth would say. “Surely there are others in the village, or elsewhere in his circle of friends and family, who weren’t particularly enamored of him. What about motives for people other than you?”

“I’ve thought of this. I’ve come up with a list of five people who have differing degrees of motive, in my opinion.” He eyed McLaren’s notebook, hesitating as he watched something being jotted down. “Do you, uh, want my ideas?”

“Just the sketchiest of info, then. Not enough so it will color your view and opinion of them.”

“I form my own opinions, thanks anyway.” Jo A. Hiestand grew up on regular doses of music, books, and Girl Scout camping. She gravitated toward writing in her post-high school years and finally did something sensible about it, graduating from Webster University with a BA degree in English and departmental honors. She writes two British mystery series—of which two books have garnered the prestigious N.N. Light’s Book Heaven ‘Best Mystery Novel’ two years straight. She also writes two Missouri-based mystery series that are grounded in places associated with her camping haunts. The camping is a thing of the past, for the most part, but the music stayed with her in the form of playing guitar and harpsichord, and singing in a folk group. Jo carves jack o’ lanterns badly; sings loudly; and loves barbecue sauce and ice cream (separately, not together), kilts (especially if men wear them), clouds and stormy skies, and the music of G.F. Handel. You can usually find her pulling mystery plots out of scenery—whether from photographs or the real thing.

Jo A. Hiestand will be awarding a $25 Amazon/BN GC to a randomly drawn winner via rafflecopter during the tour.