Blog Tour and Giveaway: The Nutcracker's Suite by Chautona Havig 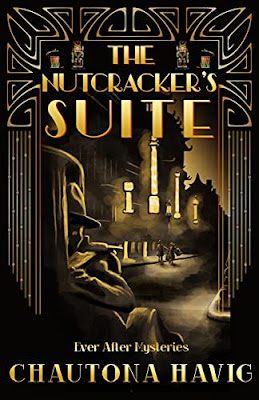 A painter at the Meyer’s Toys factory, Clarice Stahl, knows something is
strange about the way so many men come and go through Mr. Meyer’s
office, especially one in particular.

Then murder strikes a little too close to home and uncorks a barrel of
secrets.

When mob king, Mario Topo’s, enforcer goes missing the race is on to
prove he’s behind the murder. Police and mobsters alike are after Milo
Natale, and he who finds Milo first might determine the enforcer’s fate.

A race through the city, a new friend… or more… a new life in the
offing. Milo and Clarice must find who killed Topo’s man and why before
the police arrest him for murder or Topo’s men bump him and Clarice off,
too.

This next book in the Ever After Mysteries combines “The Nutcracker
Suite” with a murder mystery set in the heart of 1920s Rockland. You’d think that while writing a book based on the fairy tale of The Nutcracker and the Mouse King, I’d have heard “Dance of the Sugar Plum Fairy” in my head as I wrote. Well, I guess for a brief moment I did, because at some point, someone actually says that. “Dance, sugar plum!”

But Tchaikovsky isn’t who played in my head as I wrote. Over and over, word after word, my fingers did their bourres and glissades across my keyboard to one, rather unexpected song. “Ballerina” (I prefer the version sung by Buddy Clark. You can listen HERE.)

However, there are so many elements of the original ballet’s story in mine. I thought I’d share a few of them.

Let’s talk about the cast of characters.

Clarice Stahl is our “leading lady.” It’s kind of obvious where I got her name since the original character was Clara Stahlbaum.

Clarice works for Mr. Dieter Meyer, the owner of Meyer’s Toys. He gives her the job of painting nutcrackers. So, it’s not too difficult to see the connection to Uncle Drosselmeyer who gives Clara the nutcracker, no?

All of 1925 Rockland is in the clutches of mob king, Mario Topo. For those not fluent in Italian, can you guess what “topo” is in that language? Remember… he’s the mob “king.” 😉

But I think my favorite name of all is Emiliano (I call him Milo) Natale (Christmas in Italian… just sayin’) who is known as “the nutcracker.” He’s an enforcer for Mr. Topo, and that means he squeezes people until they crack and do what Topo wants. Let’s hope he repents!

Yes, I had a boatload of fun coming up with this stuff! How’d you guess?

I have a secret to confess about this book. I’m writing this post when I’m only about a quarter of the way done. I went to get the synopsis for this tour and went, “oops!” You see, I forgot that I’d planned to make Milo going missing a big part of the plot.

Guess who has to flex? I’d better get back to it. They need to figure out who killed our victim… and why. And before Clarice is next!

For the Love of Literature, November 28

By the Book, November 28

For Him and My Family, November 30

The Meanderings of a Bookworm, December 7

Through the fire blogs, December 7 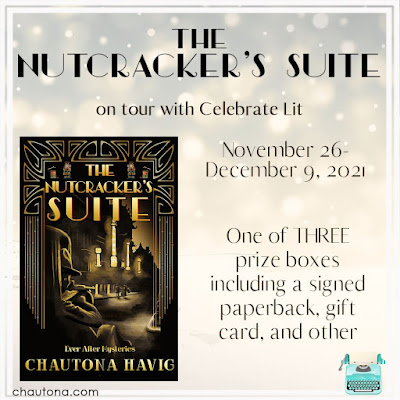 To celebrate her tour, Chautona is giving away to three winners one Prize box each including a paperback of The Nutcracker’s Suite, themed goodies, and a $10 Amazon Gift Card in each!!

Chautona Havig once again uses her talent and contributes to the sixth installment from the Ever After Mysteries series. The Nutcracker's Suite is yet another great mystery by her. This one is my favorite of the series to date. It was entertaining to be taken back to the 1920s Rockland and fun that it was based off of The Nutcracker. I was hooked from the start with Nicolo and Clara’s story. I had to keep reading to find out how it was all going to end. I loved it!

The Nutcracker’s Suite is getting five stars from me. I recommend it for readers who enjoy reading clean historical suspense. I am looking forward to the next book from the Ever After Mysteries series, Denise Barela’s Silencing the Siren.

I received a digital copy of The Nutcracker's Suite from the publisher, but was not required to write a positive review. This review is one hundred percent my own honest opinion.