12 Days of Fantasy for Christmas and Giveaway: Tales from Parallel Worlds by Jes Drew 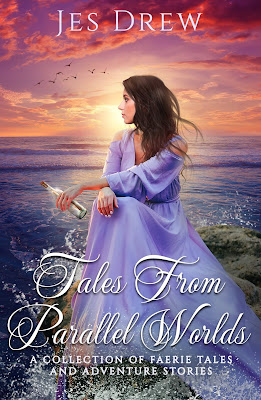 An illustrated collection of faerie tales and adventure stories from two worlds parallel to each other. One is a world filled with fae folk and monsters, and the other is place of clockwork and alchemy. Both are brimming with magic, mystery, and mortals who must find their places within.

Between the pages of these worlds, a boy learns his childhood friend is a dyrad, a lady must sneak away from her own ball to provide the cure to a plague-infected village, a siren has to solve a murder, and more.

Also includes an exclusive short story from the Howling Twenties series, involving the enchanted forest, a wedding day, and a blood moon.

Be swept away in tales of wonder- with all profit going to Polaris so girls and boys can have a chance to live their own faerie tales and adventures in freedom.

I wrap my arms around my masked rescuer, not sure whether to feel relieved at not having to travel through those woods alone and on foot, or worried that this strange man might be abducting me.

“My father is a powerful man," I whisper into the man's shoulder.

With relief, I note that we are retracing the same path as before. “What is your name anyway, good sir?”

He seems to consider this for a long moment, and even glances down at his steed as if the beautiful Arabian might somehow remind him of his name.

I frown. “That is not a real name. You’re hiding something.”

He halts his Arabian, and I start. Then I turn to see that my home stands nearby, close enough to walk to, and far enough to do so while avoiding the guests that are now beginning to depart.

I turn back to the so-called ‘Scarlet Arvensis.’ “We have met before, have we not?”

He says nothing, but he doesn't resist as I slide my hands up under his hood and feel a face that is young and strong and clean-shaven. But I could already see as much from what little of him protrudes beneath his cloak; his strong chin, and lips that seem tilted at an amused angle.

His hands grasp my wrists. A precaution to keep me from flipping off his hood, perhaps. But he doesn't pull away. Instead, he leans forward. "It was an honor escorting you, Lady Manette."

I study his lips. I have never kissed a masked rogue before. Or a stranger. Or anyone who I wasn’t trying to manipulate to join an army I didn’t believe in.

“Your chivalry was appreciated,” I whisper. Then I slide off the Arabian and move toward my home. 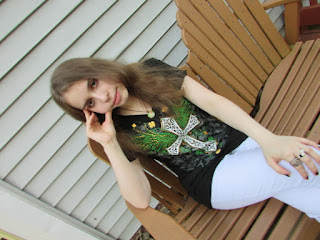 Jes Drew is the author of the Ninja and Hunter trilogy, the Howling Twenty trilogy, the Kristian Clark saga, the Castaways trilogy, and The Dystopian Takeover trilogy. She read every fairy tale book she could get a hold of as a child, Captain America is her version of Prince Charming, and she’s pretty sure she's a mermaid.