Review Tour and Giveaway: Murder Double or Nothing by Lida Sideris

Murder: Double or Nothing:
A Southern California Mystery
by Lida Sideris 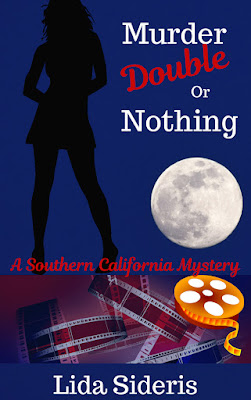 Corrie Locke, newbie lawyer and daughter of a late, great PI, is learning the ropes at the Hollywood movie studio where she works--and where things are never what they seem. Life imitates art when a fictional murder attempt turns real--right before her eyes.

With more than a little help from friends and a crazy movie legend, Corrie trips down a trail littered with wisecracks, mysterious messages, and marginally legal maneuvers to track down the killer. Meanwhile, clues keep disappearing and Corrie makes an enemy whose deadly tactics keep escalating. Will her impromptu sleuthing skills be enough to catch the mysterious assailant before he takes her down?

He pedaled the bicycle hard and fast down the narrow, deserted alley, stealing glances behind him. It was a late, warm Friday afternoon somewhere on the eastside of Los Angeles where police protection was scarce and hoodlums plentiful. Two and three story buildings huddled together on both sides of the rider. Graffiti stained the walls.

Hunched over the handlebars, the cyclist whizzed past a dented metal dumpster, unsettling newspapers and milk cartons pressed against a doorway. The collar of a gingham dress shirt stuck up beneath his red pullover and a backpack flopped behind him. Chuck Taylors clinched his nerdiness, as did the argyle socks. He looked fresh out of a computer lab, on his way to the library. There was nothing unusual about him, if you didn’t count the bulging eyes, gritted teeth and heavy panting. His expression belonged on a trapped animal.

A black sedan barreled around the corner, tires grinding and coughing up pieces of asphalt. Leaning his torso out of the passenger window, a muscular guy in a white T-shirt clutched a revolver. He aimed at the cyclist, fired three times and missed.

The rider angled around a corner and skidded to a stop. Dropping the bicycle on its side, he stumbled over the upturned wheel moments before the car crushed the bike beneath its fat tires, spitting out a tangle of metal and chrome. The car parked, and two thugs spilled out. They raced after the cyclist, guns drawn. The nerd careened toward the side of a brick building and jumped up, arms outstretched above his head. The silver cuff around his wrist glinted as he grabbed the bottom rung of a fire escape ladder, legs flailing wildly. The ladder creaked and swayed. He’d barely started the climb when the hoodlums fired. And missed again.

The nerd scrambled onto a landing and dove through an open window. 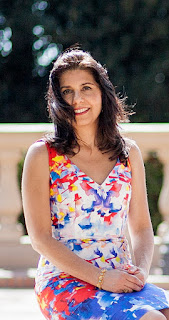 Lida Sideris' first stint after law school was a newbie lawyer's dream: working as an entertainment attorney for a movie studio...kind of like her heroine, Corrie Locke. Lida lives in the northern tip of Southern California with her family, rescue dogs and a flock of uppity chickens. She was one of two national winners of the Helen McCloy Mystery Writers of America Scholarship Award for her first book.

Lida Sideris will be awarding a copy of the book (US ONLY) to a randomly drawn winner via rafflecopter during the tour.

Murder: Double or Nothing is the third installment from the Southern California Mysteries by Lida Sideris. Even though it is a part of a series, I believe it can be read as a stand alone. I thought is was a good little mystery. I did find it a little predictable but still a fun story to read. I entertained by some of the laugh out loud moments in few of the scenes. Corrie and Michael made a delightful team and enjoyed them together.

I give Murder: Double or Nothing three and a half stars. I would like to read the other books from Lida Sideris.