Blog Tour and Giveaway: Beauty Among Ruins by J'nell Ciesielski 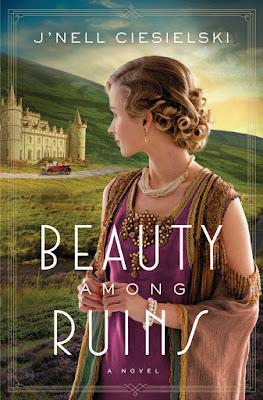 American socialite Lily Durham is known for enjoying one moment to the next, with little regard for the consequences of her actions. But just as she is banished overseas to England as a “cure” for her frivolous ways, the Great War breaks out and wreaks havoc. She joins her cousin in nursing the wounded at a convalescent home deep in the wilds of Scotland at a crumbling castle where its laird is less than welcoming.

Alec MacGregor has given his entire life to preserving his home of Kinclavoch Castle, but mounting debts force him to sell off his family history bit by bit. Labeled a coward for not joining his countrymen in the trenches due to an old injury, he opens his home to the Tommies to make recompense while he keeps to the shadows. But his preference for the shadows is shattered when a new American nurse comes streaming into the castle on a burst of light.

Lily and Alec are thrown together when a series of mysterious events threatens to ruin the future of Kinclavoch. Can they put aside their differences to find the culprit before it’s too late, or will their greatest distraction be falling in love? 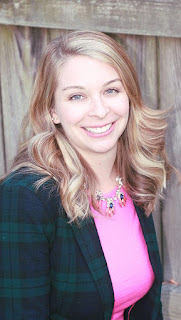 With a passion for heart-stopping adventure and sweeping love stories, J’nell Ciesielski weaves fresh takes into romances of times gone by. When not creating dashing heroes and daring heroines, she can be found dreaming of Scotland, indulging in chocolate of any kind, or watching old black and white movies. Winner of the INSPY and the Maggie Award, she is a Florida native who now lives in Virginia with her husband, daughter, and lazy beagle. Learn more at www.jnellciesielski.com.

Inspiration for Beauty Among Ruins

Once again, blame it on Downton Abbey. This time on Lady Rose. She was impulsive, spoiled, a free spirit, yet with a good heart. I knew I wanted to take on the challenge of writing a heroine like her. A character who starts off one way and by the end of the book has completely charmed you over. So I started writing and everything was going great until … it wasn’t. The plot just stopped on me. No matter how hard I tried the story refused to reveal itself to me which is incredibly frustrating for someone who doesn’t like to give up once they’ve started something. But I had to. In the end, I had to put the story, affectionately titled Love on the Limp, away for several months while I wrote The Socialite. Then one day the story clicked. It was meant to be a WWI telling on the classic Beauty and the Beast story. Everything fell into place and the story and characters burst onto the page in glorious technicolor.

Lily and Alec took me by surprised with how much I fell in love with them. Bubbly Lily and brooding Alec. Never had two more opposites been so perfect for one another (at least in my writing experience). They had so many obstacles to overcome, many of them self-imposed, that I often found myself in tears over their heartaches, but golly gumdrops when they came together, boy o boy were there fireworks!

You may have also noticed that the story is set in Scotland because I happen to believe that every good story is set there. I had the privilege of staring at pictures of this breathtaking landscape for months so I could imagine the characters strolling among the heather  and watching the river twist through the green moors. To me, nothing rivals the awe inspiring beauty of a certain place, and hopefully readers will feel that through these pages.

Through the Fire Blogs, January 27

Reflections From my Bookshelves, January 29

Where Faith and Books Meet, February 1

As He Leads is Joy, February 2

For Him and My Family, February 6

She Lives to Read, February 7

To Everything There Is A Season, February 8 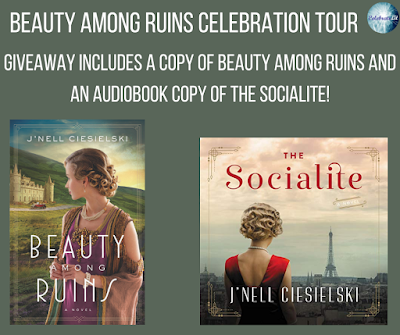 To celebrate her tour, J’Nell is giving away the grand prize of a paperback copy of the book and an audiobook copy of The Socialite!!

I have had the pleasure of reading and enjoying books by J'nell Ciesielski previously. I was not disappointed with this one. It is by far my favorite that I have read by her to date. It was so very good. I loved Lily and Alec’s right from the start. It had a mixture of history, mystery, suspense, danger, adventure and romance. I devoured this book in just a few hours. I could not find myself putting it down until the very end.

Beauty Among Ruins will be getting a very well deserved five plus stars from me. I am eagerly waiting for more releases by J'nell Ciesielski in the future. I highly recommend this one for readers who enjoy reading clean historical fiction and romance. I do not think it should be missed.

I received Beauty Among Ruins from the publisher. This review is one hundred percent my own honest opinion.