Blog Tour and Giveaway: Her Steadfast Heart by Sharlene MacLaren 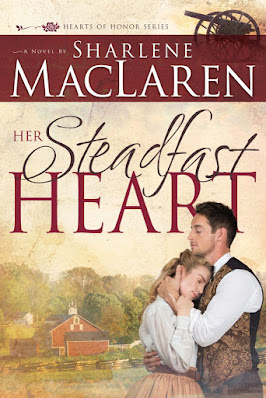 Joey Fuller is still mourning three years after his wife’s death, so much so that he leaves his four rambunctious young children to throw himself into the Civil War as a Union captain. But his kids are so ill-behaved that nannies keep quitting—and now, his mother has a broken leg and can’t handle them either. In desperation, Joey decides to advertise for a wife.

Faith Haviland is in a different kind of mourning. Not long ago, her fiancé left her to marry her best friend. Her customers at the diner where she works keep reminding her of that humiliating event and one of them, an older man, has been making aggressive advances. She’s desperate to flee the city—and Joey Fuller’s “Wife Needed” ad seems to be the answer to a prayer.

Will Faith live up to her name when Joey’s kids torment her with their mischief? Can she surrender this strange marriage to God while her new aloof husband is off fighting? And will a string of buttons convince her that he truly loves her? 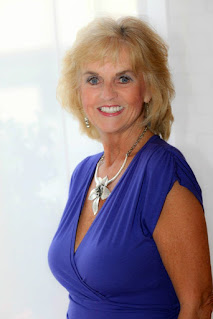 Born and raised in west Michigan, Sharlene MacLaren attended Spring Arbor University. Upon graduating with an education degree in 1971, she taught second grade for two years, then accepted an invitation to travel internationally for a year with a singing ensemble. After traveling for a year, she returned to her teaching job, then in 1975, she reunited with her childhood sweetheart, and they married that very December. They have raised two lovely daughters, both of whom are now happily married and enjoying their own families. Retired in 2003 after thirty-one years of teaching, Shar loves to read, sing, travel, and spend time with her family—in particular, her adorable grandchildren!

Shar has always enjoyed writing, and her high school classmates eagerly read and passed around her short stories. In the early 2000s, Shar felt God’s call upon her heart to take her writing pleasures a step further, so in 2006, she signed a contract with Whitaker House for her first faith-based novel, Through Every Storm, thereby launching her professional writing career. With more than twenty published novels now gracing store shelves and being sold online, Shar gives God all the glory.
Shar’s novels have won numerous awards. Her Steadfast Heart is her twenty-first novel and the second book in her Hearts of Honor series (after Her Rebel Heart).
Shar has done numerous countrywide book signings and has participated in several interviews on television and radio. She loves to speak for community organizations, libraries, church groups, and women’s conferences. In her church, she is active in women’s ministries, regularly facilitating Bible studies and other events. Shar and her husband, Cecil, live in Spring Lake, Michigan, with their beautiful white collie, Peyton.

Shar loves hearing from her readers. If you wish to contact her as a potential speaker or would simply like to chat with her, please send her an e-mail at SharleneMacLaren@Yahoo.com. She will do her best to answer in a timely manner.

Faith Haviland swept a few strands of damp hair off her forehead, irritated by how it had escaped the neat bun of this morning. She shoveled more dishes into the sink and set to washing them as fast as possible to prepare for the supper crowd that would soon descend upon Daybreak Diner. It wasn’t a fairytale job by any means, but, alas, it was a job, and many would clamor for it if her Aunt Martha ever hung up a “Help Wanted” sign in the window. Her aunt, who happened to be her father’s younger sister, owned and operated the establishment and often stated her wish for Faith to one day take it over. Faith shuddered at the prospect of telling Martha she’d been entertaining the idea of leaving Columbus. Martha wouldn’t like the news, but Faith couldn’t worry about that. Things had grown too tedious in her hometown, and too many found it their job to remind her of the unfortunate event of her canceled wedding. Add to that the troublesome, if not peculiarly obsessive, behavior of Stuart Porter, and tedious hardly described it. Ever since her fiancé’s departure with her best friend just two weeks before their April 15 wedding day, Mr. Porter had started closing in on her, insisting he would marry her in an instant if she’d simply agree.
For as long as she could recall, the man had outwardly admired her, even though she had done nothing to encourage it. Nothing about him appealed to her. First, he didn’t serve the Lord; second, he was an obsessive drinker; third, he came off as pushy and persistent; and finally, he resembled a goose with his nose sticking out like a beak. Not that looks meant all that much—goodness, she didn’t consider herself any major prize—but it was all the other things thrown in. The man was almost twenty years older than she and widowed to boot. At least, that was the rumor anyway. No one had really known his wife, only that she was there one day and gone the next. Some said she’d died, and others said she’d left him for another man. Whatever the case, it’d been a mysterious event that few knew anything about, and if they did, no one discussed it much, probably mostly from lack of caring.

For the Love of Literature, February 14

For Him and My Family, February 17

Labor Not in Vain, February 18 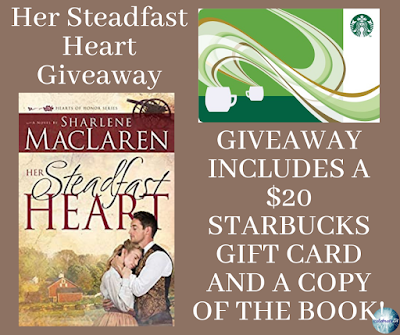 To celebrate her tour, Sharlene is giving away the grand prize package of a $20 Starbucks gift card and a copy of the book!!