This post is part of a virtual book tour organized by Goddess Fish Promotions. Bobbi Smith will be awarding a $10 Amazon or B/N GC to a randomly drawn winner via rafflecopter during the tour. Click on the tour banner to see the other stops on the tour. 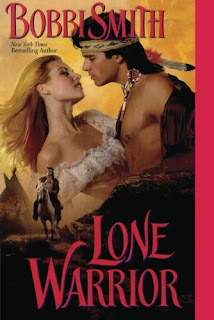 Taken captive in a Comanche raid, terrified Marissa Williams awaits her fate alone in a tipi. Wind Ryder enters his tipi to find the chief’s gift of the blond beauty. Once a captive himself, Wind Ryder understands her fear. How can he protect his terrified prisoner from the other men in the village who see her as nothing more than an object for their pleasure?

Marissa remained alone, a captive in the tipi. As the hours passed, her uncertainty grew. Darkness was claiming the land when she decided to try to escape. Quietly leaving the tipi, Marissa didn’t get far when Laughing Woman confronted her.

“Go back!” she commanded in the Comanche tongue, pointing toward Wind Ryder’s tipi. Her husband had directed that the captive was to stay there until Wind Ryder returned from his raid.

Marissa’s hope of escape was ruined. She went back into the lodge, wondering if she would ever be able to save herself. As she stepped inside, she gasped in shock. There was another woman in the tipi. She was hunched down and visibly shaking, a shawl covering her head.

“Who are you?” Marissa demanded, frightened.

At the sound of her voice, the woman went completely still. Slowly, she lifted her head to stare at the woman before her.

“Who are you?” Crazy One asked in English.

“You speak English?” Marissa was stunned.

“You speak English?” Crazy One repeated, peering up at her. “Why are you in Wind Ryder’s Lodge? It is not good to be here! I must leave—before he returns.” She stood, ready to flee, her expression one of panic and fear.

“Who are you?” Marissa demanded again, shocked as she realized the woman was white.

“They call me Crazy One.”

“No, you are Shining Spirit. Chief Ten Crow said so.”

“No, I’m Marissa Williams and I was taken captive—”

“Doesn’t matter,” she cut Marissa off as she looked nervously toward the doorway. “Wind Ryder may be coming.”

“Who is Wind Ryder? Why are you so afraid of him?”

“You will see,” Crazy One answered slowly. “He is a fierce warrior—an angry warrior. I must go.”

She fled the tipi.

Marissa watched Crazy One run off, then looked around to realize the other villagers were watching her. Her emotions in turmoil, she sank down on the blankets, wondering in fear who the warrior named Wind Ryder was.