Book Blast and Giveaway: Back to the Beginning by Christina Ann Gist

This post is part of a virtual book tour organized by Goddess Fish Promotions. Christina Ann Gist will be awarding a $10 Amazon or B/N GC to a randomly drawn winner via rafflecopter during the tour. Click on the tour banner to see the other stops on the tour. 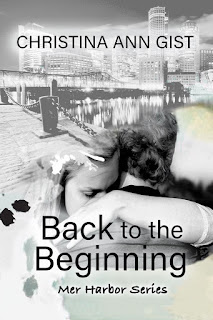 Mer Harbor is a small, coastal town in Southern California. Everyone knows everyone, and nothing is a secret among Mer Harbor residents. Some hope to escape someday, while others find the charm of the town enticing, and never leave.Everley Romero and Heath Mitchell had always planned to take on the world together. To leave Mer Harbor and pursue their dreams. It all seems to crumble when a tragic loss sends them in different directions. Almost ten years later, Everley finds herself on the receiving end of a bitter divorce, leaving her no choice to return to the home - and past - she'd hoped to leave behind for good. Heath is building a good life for himself in Mer Harbor. When he crosses paths with Everley, he learns that they'll both have to face a past full of heartbreak and loss that they've both tried to bury.

“Hey sweetheart.” Heath sat down on the grass by the headstone that marked where his little girl was buried. “I brought you a daisy.” He pulled the little white flower from his coat pocket and laid it next to the stone.

She couldn't answer, and the grave was nothing more than a memorial, but visiting and talking as if she were listening made him feel better. “I know your birthday's not for another two weeks,” he continued, “but I've had a rough few days.” He choked up, “It's been nearly eight years, yet I still feel as if we lost you just yesterday. Your mother's come back into town, and that's probably part of the reason it hurts so much more right now.”

“Sorry,” someone whispered softly. Heath looked up and saw Everley walking towards him, stopping a short distance away. “I didn't know you were here... I can come back later. ”

Everley hesitated, then started shaking. “I haven't been here since the funeral. It was always too painful-” whatever else she was going to say was lost in mumbles as she started crying.

Heath stood and crossed the distance she'd left between them. He expected her to pull away when he wrapped his arms around her, but she stayed, burying her face in his chest as he tried to calm her. She continued talking, but it was hard to understand her muffled words. It sounded like apologies, but he couldn't quite make out for what. “Shhhh,” he soothed, “it's all right... I've got you.” He felt her arms wrap around his waist, and he squeezed her tighter, letting her know he wasn't going anywhere.

Telling stories before she could even write, Christina grew up knowing she wanted to be an author. She “published” her first stories with construction paper and handwritten pages for her family and friends. Now, with the magic of technology, she’s able to share her characters and stories with the world.

When she’s not writing, you can find her dabbling in her other favorite hobbies such as photography, stargazing, and of course: looking for her next adventure.