Blog Tour and Giveaway: I Never Knew You by Patrick Higgins 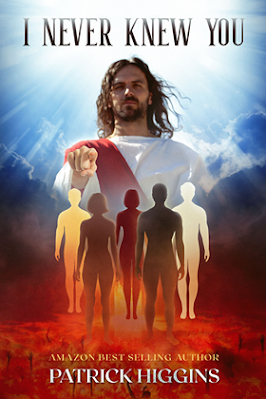 Book:  I Never Knew You

Is the God you serve the true God of the Bible? If you profess faith in Christ, this book will challenge you mightily from beginning to end, GUARANTEED!

Charmaine DeShields thought she had it all. A promising career. Good health. A beautiful house. A promising relationship. Most importantly, she was a proud member of the largest and most popular megachurch in all of Seattle—the Blessed and Highly Favored Full Gospel Church.

Everything started changing in her seemingly perfect life after a pastor visiting from China created such an uproar at her church, with messages most members found both mean spirited and judgmentally offensive, that Mark Lau was asked to leave and told never to come back.

It took traveling all the way to Shanghai, China, with her best friend, Meredith Geiger, for Charmaine to discover the many differences between her church, which was opulent in every sense of the word, and Pastor Lau’s church, which was located beneath a dry cleaners, of all places.

Even more telling were the messages both pastors preached. Despite that they taught from the very same Book, their messages couldn’t have been anymore polarizing. While Charmaine was instantly intrigued by the whole “underground” experience, Meredith was so traumatized that she cut short what had been the best vacation of her life, to go back to the States.

But not before alarming Charmaine’s boyfriend of the grave danger they faced. Rodney Williams then told lead pastors, Julian and Imogen Martín, who flew 5,700 miles from Seattle to China, to rescue her from the so-called pastor who’d already caused some to leave their megachurch.

Upon arriving, they learned their suspicions were quickly confirmed. Mark Lau had used his subterranean gathering place to radically change Charmaine’s way of thinking. Despite her strongest protests, they flat-out refused to believe that God had used him to transform her life and deepen her faith, to the extent that she finally had eternal assurance.

Tragically for the Martíns, by the time they discovered the prosperity Gospel they’d been preaching was a false one, it would be too late… 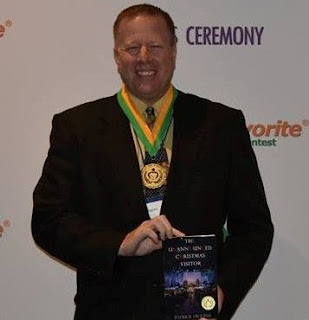 Patrick Higgins is an Amazon bestseller and award-winning author of the end times prophetic series, Chaos In The Blink Of An Eye. The “CHAOS” in our present world is well documented in this series, which won the Radiqx Press Spirit-Filled Fiction Award of Excellence, soon after the first installment was published. Download now and see for yourself why JUST UNDER 3000 POSITIVE RATINGS – REVIEWS have been posted on Amazon and Goodreads, on the first 6 installments…and counting!

Once completed, there will be 12 installments…

Higgins also wrote “I Never Knew You”, “The Pelican Trees”, “Coffee In Manila”, and “The Unannounced Christmas Visitor”, which won the 2018 Readers’ Favorite Gold Medal Award in Christian fiction.

Is the God you serve the true God of the Bible? Charmaine DeShields always thought so. How could she not after practically going from rags to riches in the seven years she spent as a full-fledged member of the most influential church in all of Seattle—the Blessed and Highly Favored Full Gospel Church? From a financial and materialistic standpoint, she felt incredibly blessed by her Maker.

It took traveling all the way to Shanghai, China, and spending a few days in an underground church—with persecuted believers who’d lost everything for their faith in Christ—for Charmaine to discover that the relationship she had with Jesus wasn’t nearly as secure as she had always thought it was.

In fact, the biblically-sound preaching she was exposed to in Pastor Mark Lau’s subterranean house of worship was so profound, it forced her to question whether or not she was even saved at all…

Based on Matthew 7:21-23, if you profess faith in Christ, this story will challenge you from start to finish—GUARANTEED! Since its release in September 2020, the reviews on Amazon and Goodreads have been nothing short of stellar. Many are calling it Patrick Higgins’ best book to date and predict it will become an award-winner like his other books.

Because I said so — and other adventures in Parenting, February 5

For Him and My Family, February 12 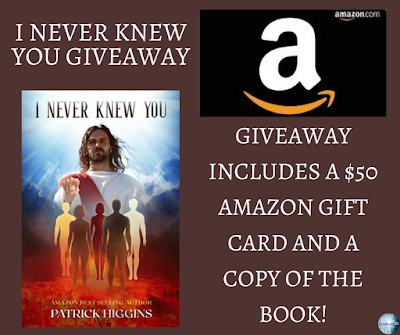 To celebrate his tour, Patrick is giving away the grand prize package of a $50 Amazon gift card and a copy of the book!!

I Never Knew You is another good read by Patrick Higgins. I have read some earlier releases by him and have enjoyed him. His writing is little bit different and takes a few pages of getting used to. But once I do, I am hooked. This one was no different. The story line is unique and something I have not read before, which was a refreshing reading something new. It is thought provoking at times that made want to find more as to what would happen next.

I Never Knew You will be getting four stars from me. I recommend this one for readers who are looking for inspirational fiction. It is full of faith that I know so many readers who would be able to gain something special within the book.

I received I Never Knew You from the publisher. This review is one hundred percent my own honest opinion.