Romance writer Mona Rossi's book sales are slipping. She needs new ideas and fast! Her vampire love, Fausto Silvius is a doctor aboard the Romanza, a luxury cruise ship. Holding a "Motion on the Ocean" writer's cruise sounds like a great idea. What better way to combine a career boost with romance? But they soon discover hunters on board who give chase to Fausto and his fellow vampires. While he longs to bring Mona into his world, how can he convince her to join him with fringe lunatics on the hunt? In the prime of her life she's not sticking her neck out for a shot at eternity.

Setting goals is a key to success. Sacrifice helps, too. In 1999 I signed with my first publisher Domhan Books of the UK. I spent several summers in England writing, researching, and revising my 4-book Yorkist saga. A dedicated history buff and Anglophile, I’m a member of the Richard III Society, a fascinating group of learned historians, some of whom claim to have met Richard. My husband Chris and I own CostPro Inc., a construction cost consulting company in New England. I’m indulging another longtime interest, archaeology, for which I’m working on a Master’s Degree. We also love to travel. The Mediterranean cruise “Cradles of Civilization” aboard the Rotterdam included a visit to the Pyramids of Egypt. I was fortunate to visit Poland, my grandmother’s native land, and Chopin’s birthplace as well as the resting place of his heart, Warsaw. I have a Real Estate license and since 1994 I’ve owned rental condos in Myrtle Beach and New England. My stories are romances set against a backdrop of political upheaval, court intrigue, poverty, general drama of the surroundings, and sometimes a splash of the paranormal. What I’m trying to convey is that love can prevail no matter what the conflicts and obstacles, earthly or not. I recently began writing biographical novels with no fictional characters. I enjoy living in the most beautiful spot on Earth, my beloved Cape Cod. 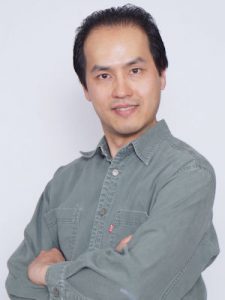 Anthony Lee has been told that his voice is deep, resonant, smooth, and clear. Yet, it would be years before he would finally embrace that gift and start using it artistically.
A native of California, Anthony grew up with an equal fascination for knowledge and leisure. He would enjoy studying various subjects in school as well as doing fun things in his spare time. His motivation for success and happiness helped him achieve a solid education, a successful job, and a new life to live as his reward for years of hard work. His decision to try voice acting came after receiving plenty of compliments about his vocal quality over a short amount of time. Whether those words came from friends or strangers, he could no longer deny the possibility that there may be something special about his voice. Hence, from October 2015 to June 2016, Anthony enrolled in night and weekend classes at Elaine Clark's Voice One academy in San Francisco, where he trained in the art of voiceover for narrations, commercials, and characters. He thoroughly enjoyed honing his voice for things like audiobooks, technical materials, corporate narrations, e-learning modules, documentaries, commercials, promos, animations, video games, and talking products. Overall, he considers his journey into voiceover to be very rewarding, not just for what he learned but also for the great instructors and classmates he met along the way. Now with professional voice training, Anthony is stepping out into the world to lend his voice. He loves to take virtually any kind of script and work to deliver the message in a suitable way. His enthusiasm for voiceover makes him strive to be a versatile actor in the craft. Every time he is given an opportunity to provide a voice, he hopes to leave a lasting positive impact. When he is not doing voice work, Anthony enjoys playing chess, ice hockey, pool, Sudoku, and video games, as well as watching movies, reading about random topics on the Internet, and traveling. He lives in Northern California.

A Bloody Good Cruise is my first introduction to the writings of Diana Rubino. This book tells about an author, Mona, the human, and a doctor, Fausto, the vampire. They are on a cruise and are attracted to one another. They find themselves in danger because of an ex wife and vampire hunters.

I have to admit A Bloody Good Cruise is one read I was not sure about at first, but I love to dive into something new. I am so glad I did. I thought this book was great. I enjoyed the danger, fast paced action, adventure and the opposites attract romance. I thought it was an all around fun read. Especially, the audio version. The performance of Anthony Lee was fabulous.

I am giving A Bloody Good Cruise four and a half stars. I would love to read ore stories by Diana Rubino in the near future. I recommend this one for those who enjoy paranormal romance.

I received the audio version of this book from the publisher. This review is 100% my own honest opinion.
I received this audiobook as part of my participation in a blog tour with Audiobookworm Promotions. The tour is being sponsored by Anthony Lee. The gifting of this audiobook did not affect my opinion of it.

Aug. 10th:
Notes from 'Round the Bend
Readeropolis
Nesie's Place

➜Sign up as a host here
Posted by Amybooksy at 1:00 AM