Blog Tour and Giveaway: The Awakening of Miss Adelaide by Linda Brooks Davis 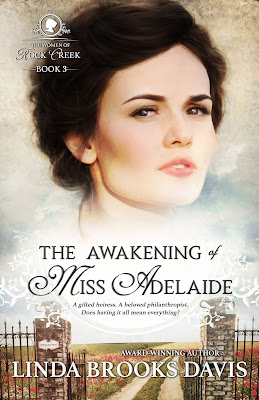 Orphaned as an infant, Oklahoma heiress Adelaide Fitzgerald has enjoyed every advantage. She possesses a unique gift for music and has excelled on the opera stage in Italy. As a philanthropist, she’s adored from America to Europe. But Miss Adelaide is about to awaken in a 1918 nightmare. The Great War—and the Great Influenza—knock, and Adelaide finds her uninvited guests more than unwelcome. They threaten her life and alter her identity and purpose. Snatched from a quiet life in an Italian villa, Miss Adelaide is thrust into conflicts others have created. What battle scars will she sustain? And where will love lead her? In The Awakening of Miss Adelaide, war and peace, laughter and heartache, love and loss come together to ignite a fresh fire that reveals one woman’s hidden needs and potentials.  What will gaining a fresh understanding of herself require of the Angel of the Opera? 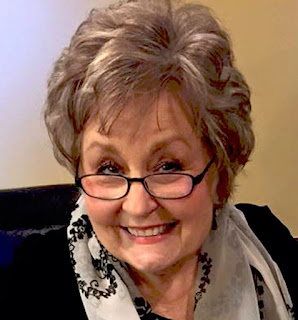 Linda Brooks Davis was born and reared, educated, and married in Texas. Her children and six grandchildren were born in Texas. She devoted the bulk of her 40 years as a special educator in Texas schools. But her mother and grandmother hailed from Oklahoma, the setting for Linda’s 2015 debut novel, The Calling of Ella McFarland, which won the 2014 Jerry Jenkins Operation First Novel Award and the 2016 American Christian Fiction Writers Carol Award. Linda continues to write from her home in San Antonio, Texas. She and her beloved husband Al worship and minister at Oak Hills Church. Linda enjoys chatting with readers through her website www.lindabrooksdavis.com.

Awakening Miss Adelaide begins with my mother’s cedar chest, which bore an unwritten warning: Hands off! Priceless treasures resided in its depths. My parents’ wedding suits. An old tattered quilt. Mother’s felt hat with a jaunty feather at the rolled-up grim. Bible notes. A stained tablecloth. Equally stained ladies’ handkerchiefs. And old, crocheted, scorched pot holders. My paternal great-grandmother wrote letters and created intricate, painstaking handwork while she was committed to an asylum in Terrell, Texas. They represent the dearest items in the cedar chest. Incalculable are the times over the years when a family member would comment Great-granny didn’t appear insane at all. I often wondered how it was she resided at a state mental hospital from 1900 until her death in 1948. How could an insane person write coherent letters and create such handwork? Mystery shrouds those answers as surely as Great-grandmother herself. Family legend developed around her. Stories varied from “She wasn’t crazy. Her husband wanted to get rid of her” to “She was an Indian who chose the name McFarland to avoid White bias against the indigenous people.” The truth hides somewhere amid the deadfall of her tragic life. Sometimes research for a novel can feel like digging up bones. In a way, it is. One such “bone” I got my teeth around and refused to let go was an article in a 1913 edition of Fort Worth Star-Telegram. It described a murder committed in the lobby of the Metropolitan Hotel. This violent act occurred in connection with an adulterous affair. Consequently, heightened emotions, lowered common sense, and the control males exerted over females resulted in one man’s murder and the murderer’s acquittal. The “offending” woman’s husband dragged her home kicking and screaming and committed her to a mental asylum for “emotional insanity.” I wondered if the “offending” man had been treated in like manner. Hardly. How could I NOT include this morass in a novel? Someone ought to write a book about that was often said around our family reunions. My interest in doing just that developed little by little over the years. The Women of Rock Creek series deals with some of the ways in which women were denied equal rights when they were denied the vote. Such realities presented an ideal platform for illustrating some women’s plight in the hands of unscrupulous men–inequality in education, the courtroom, and even in mental health care. With an abundance of love and respect for my great-grandmother; her daughter, my grandmother; and her grandson, my father, I offer this imaginary story. It contrasts two different women: one with a voice heard around the world and the other with no voice at all. I offer The Awakening of Miss Adelaide to the Lord to do with it as He sees fit. May this story inspired by the agony experienced by my great-grandmother serve to lighten someone else’s load.


Reflections From my Bookshelves, August 10


Through the Fire Blogs, August 12


Life of a traveling wife, August 14 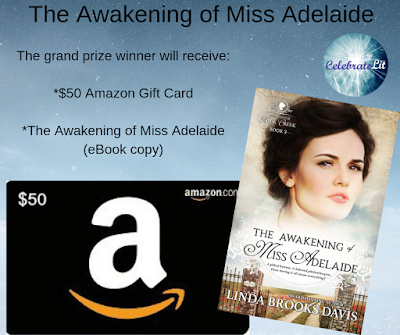 To celebrate her tour, Linda is giving away the grand prize of an eBook copy of her book and a $50 Amazon gift card!!
Be sure to comment on the blog stops for nine extra entries into the giveaway! Click the link below to enter.

The Awakening of Miss Adelaide, the third installment from the Women of Rock Creek series, is the first book I have read by Linda Brook Davis. Even though this book is part of a series and I have not read the first two books, I believe that this one can be read as a stand alone. I did not feel like I was missing anything by not reading those books prior to this one. I thought it was a good read. I enjoyed the historical details, characters, and setting. It was really fascinating to get a glimpse into those times during World War I.

The Awakening of Miss Adelaide gets four stars from me. I would love to read the first two books from the Women of Rock Creek series, The Calling of Ella McFarland and The Mending Of Lillian Cathleen, to see what had happened in those, as well. I recommend this book for those who enjoy a well written, easy to read and clean historical.