Alice, a Memoir
by Alice Gilmore 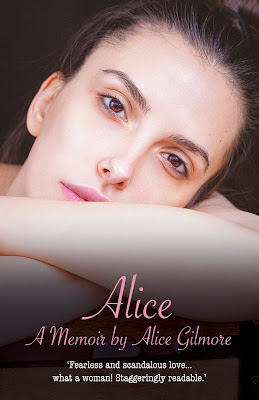 ~~~~~~~~~~~~~
GENRE: Non-fiction
~~~~~~~~~~~~~
BLURB:
Few, if anyone, could have had a life like Alice Gilmore. It was almost unbelievable yet carried on under the cover of a respectable middle-class existence.
You might strongly disapprove of what she did, but Alice was determined. She overcame insurmountable obstacles to keep the love she longed for.
Her single-minded fight to live out her love makes a gripping, riveting story that one eminent literary person called ‘staggeringly readable’. It is shocking. Her methods will upset some, but are you with her or against her? Your decision.
This is no misery memoir. It’s a story told with joy, wit and fervour – the astonishing story of the overwhelming love Alice Gilmour was determined to live out.
~~~~~~~~~~~~~
EXCERPT
The taxi took me to the student pub at the university. I went in and found a seat at the end of the bar where I could have my back to the wall and watch what went on without it being obvious that I was doing just that. In fact I sat side on to the wall, using the mirrors behind the bar. The place was quite quiet when I sat down but soon filled up. It was the favourite drinking haunt of most students because the beer was very cheap and they could take a good deal on board before going on to a disco or meal later. I looked like someone waiting for her date to turn up, except that I hadn’t realized just how much I stood out in that crowd of untidy garish youngsters. I looked infinitely more sophisticated and quite a bit older. If someone had come up to me and asked me what the hell I was doing in a joint like this I wouldn’t have been surprised. I soon spotted my prey, a six-foot, fair-haired athletic-looking boy in trainers, jeans and tee shirt. He was not nineteen, I knew, a first-year student. I wanted him as young as possible. David had researched him thoroughly, almost intrusively, and probably illegally: brilliant A levels, excellent entrance papers, a keen and talented sportsman, no known allergies or poor family health history, good looking and popular. I wanted the father of our child to be as perfect as possible.
~~~~~~~~~~~~~
AUTHOR Bio and Links:
If you want to know about my life and background read this book. I can scarcely add to what I have written about myself in there. I earnestly hope that the rest of my life is too uneventful to even consider writing anything else, I am no novelist. The life I have described was full enough and rich enough for me. God knows what I would come out with if I had to invent. If you find you need a good chef I shall consider anything not too energetic – which rules out most jobs in the kitchen.
https://www.goodreads.com/user/show/100110001-alice-gilmore
https://www.facebook.com/alice.gilmore.92775
https://twitter.com/AlicetheWife1
https://www.barnesandnoble.com/w/alice-a-memoir-alice-gilmore/1131732791
https://www.smashwords.com/books/view/940716
https://www.kobo.com/us/en/ebook/alice-a-memoir
https://www.amazon.com/Alice-Memoir-Gilmore-ebook/dp/B07S8HK65K/
~~~~~~~~~~~~~


Guest Post:
What books do I like to read?
Novels. Always novels, perhaps with a bit of biography thrown in. Until relatively recently in my life I spurned biography because it was not written by the person we are reading about. So why read about some wonderful person in a book written by some second rater. But this was nonsense, of course, some biographers are wonderful and I missed a lot of good reads because of it.
The earliest novel I can remember was a book given to me at Christmas by a great aunt called A Tale In The Time Of The Cavemen by Stanley Waterloo. I loved this book and read it constantly, practically wearing out the print. It was the story of Ab and his best friend Oak, who Ab eventually killed when they grew up in a fight over the girl Lightfoot. The odd thing is that I did not identify with Lightfoot in the least because she merely reacted to the men. Too passive for my likes. The one who did everything and made everything happen was Ab and I imagined I was Ab, performing all of his cave mannish feats and suffering over the death of his best friend. This paradox intrigued me endlessly. The fact that he killed his best friend haunted me as well as him.  Two other Christmas presents that I enjoyed were Coral Island by R.M. Ballantine and The Swiss Family Robinson, where once again the females, although more active, were too passive for my taste.
I graduated to Edgar Rice Burroughs and Tarzan, once again identifying with the male character rather than Jane, who seemed rather wet to me.
When puberty struck I discovered ERB’s Martian books in which John Carter a US Southern officer from the civil war is mysteriously transported to Mars (and back occasionally) and falls in love with a Martian princess called Dejah Thoris. At last I identified with the beautiful heroine and spent my holidays cycling to the local library to get out all the Tarzan then all of the Martian books in turn. Reading them in bed and snuggling down to dreams of what John Carter and I got up to.
Under the influence of my mother the next  author who figured largely in my teenage reading was Dornford Yates. Both his adventure stories narrated by Richard Chandos and his comedies about Berry and Co, which made me laugh inordinately. Dornford Yates, real name Cecil William Mercer an indifferent barrister, was an insufferable snob and I took on board many of the attitudes inherent in the books.
From such clichéd beginnings I moved on to Evelyn Waugh, Nancy Mitfordd, Ernest Hemingway, Kingsley Amis and Virginia Woolf’s A Room Of One’s Own and a host of mainly female authors of novels about the world round me and thrillers for pap in between. One thriller writer I could never stand was Agatha Christie. I suppose I shouldn’t call her a thriller writer, because her books never thrilled they were whodunits, jigsaw puzzles with stereotypes for pieces  My mother belonged to a theatre group that was always performing AC’s works so I got to know the plays quickly. When someone gave me a book of hers called The Murder Of Roger Ackroyd and said I’d never guess the killer. I picked it up and noted on page one that the narrator was not Miss Marple or Hercule Poirot or anyone else I knew from other books so must be the killer. ‘You looked,’ squawked my friend. But no. I was right and if I’ve spoiled the book for you get a non-thriller by Kate Atkinson to read instead and give yourself a treat.
I could go on a long time on this subject but just be catholic (small c) in your taste and you will give yourself hours of pleasure.
~~~~~~~~~~~~~


GIVEAWAY:
One randomly chosen winner via rafflecopter will win a $50 Amazon/BN.com gift card.