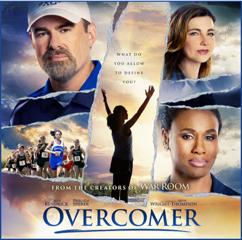 Overcomer Movie Promotion
Social – Corner
Website - https://www.overcomermovie.com
FB - https://www.facebook.com/OvercomerMovie/
Twitter - @overcomermovie  https://twitter.com/OvercomerMovie?ref_src=twsrc%5Egoogle%7Ctwcamp%5Eserp%7Ctwgr%5Eauthor
Insta - @overcomermovie  https://www.instagram.com/overcomermovie/?hl=en
SYNOPSIS
Life changes overnight for coach John Harrison when his high school basketball team’s state championship dreams are crushed under the weight of unexpected news. When the largest manufacturing plant in town suddenly shuts down and hundreds of families begin moving away, John must come to grips with the challenges facing his family and his team. Urged by the school’s principal to fill-in and coach a sport he doesn’t know or like, John is frustrated and questioning his worth ... until he crosses paths with a student struggling with her own journey.
Filled with a powerful mix of faith, a twist of humor, and a ton of heart, the Kendrick Brothers return to theaters with OVERCOMER, their newest feature following FACING THE GIANTS, FIREPROOF, COURAGEOUS, and the #1 box- office hit, WAR ROOM. The inspiring family film stars Alex Kendrick, Priscilla Shirer, Shari Rigby, Cameron Arnett, and introduces Aryn Wright-Thompson. Opening nationwide on August 23, OVERCOMER dares to leave you filled with hope, inspired to dream, and asks the question: what do you allow to define you?
ABOUT PROVIDENT FILMS
Provident Films, a division of Provident Music Group, a Sony company, develops, produces and markets faith-based films. A pioneer in the genre since 2006, Provident Films’ partnerships include Sherwood Pictures/Kendrick Brothers (WAR ROOM, COURAGEOUS, FIREPROOF and FACING THE GIANTS), The Erwin Brothers (WOODLAWN, MOMS’ NIGHT OUT and the $83 million box office surprise, I CAN ONLY IMAGINE), Kirk Cameron (CONNECT) and Graceworks Pictures (INDIVISIBLE released Oct. 26, 2018). For more information, go to www.providentfilms.org.
ABOUT KENDRICK BROTHERS PRODUCTIONS
Kendrick Brothers Productions is the company of brothers Alex, Stephen and Shannon Kendrick that exists to honor God and share the truth and love of Jesus Christ through movies, books, curriculum and speaking. By blending engaging stories with doctrinal integrity, the Kendricks seek to encourage and inspire audiences with resources that positively impact their lives and strengthen their faith, families, and personal relationships.
2018 marks the 15th anniversary of the release of FLYWHEEL, the Kendrick Brothers’ first feature film. Produced with a shockingly modest budget of only $20,000 and intended for Albany, Georgia residents where the brothers served on staff at Sherwood Baptist Church, FLYWHEEL went on to sell over a million copies in DVD format.
“We’re just amazed at what the Lord’s done with it,” says Alex Kendrick.
2018 also marks the production of the Kendricks’ 6th film, OVERCOMER. Between those two milestones, the Kendricks’ first film and the production of their latest film, the Kendrick Brothers’ body of work has been credited with creating a subcategory known as faith-based films.
With more than $150 million in box office receipts across five films plus millions more in DVD and on-demand sales worldwide, the Kendrick Brothers are recognized as leading the genre.
WHY IDENTITY?
“The movie OVERCOMER is about identity, an issue that everyone deals with. Everyone needs to answer the questions: ‘Who is God?’, and ‘Who am I?’, and the Scriptures deal with both of those things. When a person discovers who they are in Christ, it opens up an understanding of how they can live that out in a daily basis in what they do in their relationships with others,” said Stephen Kendrick.
“When we started the process with OVERCOMER, Alex began to unpack this idea of a cross-country runner who’s dealing with the issue of identity, and at the same time, I’d been studying Ephesians 1 and 2. We can see how the Lord was paralleling our paths to specifically make this movie.”
“Cross country is a very difficult sport. From the time you start, you do not stop or pause until you cross the finish line. And in many regards, that’s like our life; that’s our journey of faith,” said Alex Kendrick.
“As people are walking out of the theater, we hope that they begin to ask questions about where their identity is found, because too often we find it in our circumstances, in our titles, in what other people are saying about us, in our jobs, in our positions or awards. Those things can be taken away,” said Stephen Kendrick.
“I hope moviegoers will realize their salvation is about much more than just having a ticket to eternity. They were actually given a brand-new identity. Which means, they have access to spiritual blessings, they have an inheritance, they have all this stuff that’s available to them, this side of eternity. And when you realize that, that means the decisions you make, the relationships you have, the trajectory you choose, the ambitions that you hold, all of that stuff will reflect, and be indicative of your brand-new identity. That changes and transforms the way you live,” said Priscilla Shirer.
WHAT IS AN OVERCOMER?
“OVERCOMER in many regards, is a discovery of who we are in Christ, who gets to determine our identity and what we have to overcome to embrace the life God has for us,” said Alex Kendrick.
“Overcoming is about powering through and realizing that on the other side of it you are stronger and more courageous than when you started,” said Shari Rigby.
“Being an overcomer means you keep your head up and you know that you’re going to get through it; you figure out a way to get through it, you keep your faith strong, you get through it, and you just thank God,” said Aryn Wright-Thompson.
“Being an overcomer means there is pain, discomfort, inconvenience, life’s tough, and yet you have joy and peace and all the stuff that you can only have if there is an anchor in your soul,” said Priscilla Shirer.


I am giving two Fandango ticket codes to see this movie for one of my readers. Leave a comment and tell me why you want to see this movie. Don't forget to leave your email address, so I can contact you if you win. I will pick a winner on August 26, 2019.
For an extra entry, share this giveaway on Facebook, Twitter, Pinterest or Instagram. Leave a separate comment for each share, include the link to the share.
Good Luck!
“Disclosure (in accordance with the FTC’s 16 CFR, Part 255:  “Guides Concerning the Use of Endorsements and Testimonials in Advertising”):  Many thanks to Propeller Consulting, LLC for providing this prize for the giveaway.  Choice of winners and opinions are 100% my own and NOT influenced by monetary compensation.  I did receive a sample of the product in exchange for this review and post.

Only one entrant per mailing address, per giveaway.  If you have won a prize from our sponsor Propeller /FlyBy Promotions in the last 30 days on the same blog, you are not eligible to win.  Or if you have won the same prize on another blog, you are not eligible to win it again.  Winner is subject to eligibility verification.  No Canadian winners please, Fandango does not reach to our Canadian friends.
The ticket codes are only good as long as Overcomer is in theaters.
They can not be used for any other movies, they are for Overcomer only.  (Won’t work for any others)
Posted by Amybooksy at 1:00 AM