Days of Fantasy for Christmas and Giveaway: Evangeline Denmark

Evangeline Denmark for
Days of Fantasy for Christmas 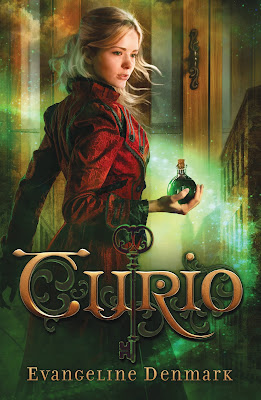 Grey Haward has always detested the Chemists, the magicians-come-scientists who rule her small western town. But she has always followed the rules, taking the potion the Chemists ration out that helps the town’s people survive. A potion that Grey suspects she—like her grandfather and father—may not actually need.

By working at her grandfather’s repair shop, sorting the small gears and dusting the curio cabinet inside, Grey has tried to stay unnoticed—or as unnoticed as a tall, strong girl can in a town of diminutive, underdeveloped citizens. Then her best friend, Whit, is caught by the Chemists’ enforcers after trying to protect Grey one night, and after seeing the extent of his punishment, suddenly taking risks seems the only decision she can make.

But with the risk comes the reality that the Chemists know her family’s secret, and the Chemists soon decide to use her for their own purposes. Panicked, Grey retreats to the only safe place she knows—her grandfather’s shop. There, however, a larger secret confronts her when her touch unlocks the old curio cabinet in the corner and reveals a world where porcelain and clockwork people are real. There, she could find the key that may save Whit’s life and also end the Chemists’ dark rule forever.

Q: How did you come up with the idea for your novel, Curio?

A: I’m a bit of a logophile and regularly get crushes on words. I was driving home one day when the word curio popped into my head and I was just smitten. I played around with it in my head, thinking about how curio and curiosity have the same root. Then I started thinking about curio cabinets and the kinds of objects found in them—knick-knacks and figurines. For a while I daydreamed about all those curios coming to life. What kind of world would they live in? What would they want, and what would be important to them? Finally I landed on the question: What would be a curiosity to these animated curios? The answer was the key to the story—a human! From there I knew I’d be writing a novel about a girl trapped in an enchanted curio cabinet.

Q: Curio is a Young Adult Steampunk Fantasy. Can you explain steampunk?

A: I don’t think anybody can really explain steampunk. You can describe it and give some rough parameters, but part of the fun of steampunk is that it’s changeable and imaginative. But generally speaking, steampunk stories take place in the Victorian era, so mid 19th century up until the turn of the century. Of course there’s wiggle room. Curio takes place in an alternate history Colorado setting in the early 1900s. Steampunk almost always contains anachronistic technology powered by steam and/or clockwork. If you’ve see the recent movie, The Nutcracker and the Four Realms, you’ve gotten a taste of the steampunk genre.

Q: Do you have a favorite character?

A: I’m a sucker for the Troubled Boy archetype, so the male characters in Curio definitely hold my heart. Both Blaise and Whit make some bad choices, but usually with good intentions. I try to make all my characters strong in some ways and vulnerable in some ways so they can take turns helping each other.

Q: Do you have any other books available?

A: The Curio prequel, Mark of Blood and Alchemy, is available on ebook, and I have a holiday novelette called The Ice Child that’s a perfect read for a snowy winter evening.

Q: Are you working on anything new?

A: Yes! I’m currently working on another YA fantasy so watch my website and social media for updates. You can find me at http://www.evangelinedenmark.com/ and https://www.instagram.com/evangelinedenmark/. 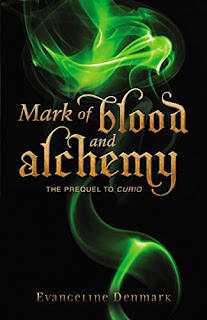 
In this novella prequel to Evangeline Denmark's YA fantasy novel Curio, Olan Havardsson flees a devastating plague that took his family only to be saved by a mysterious group of "magickers" with healing powers. But as he accompanies his rescuers to their alpine enclave, mysteries arise surrounding their potions and powers of alchemy. Questions mount when Olan observes a deep division forming between those who seek to defend the purity of the healing alchemical work and those who would wield it as a powerful weapon.


Olan is thrust into the midst of this dissention after he discovers he is somehow special--chosen as a guardian like the enclave's founder. As he spends time with two of his rescuers--Auriana, a clever and captivating inventor, and Alaric, a brooding young man wrestling with his father's cruel beliefs--Olan realizes he may have the power to direct the course of blood and alchemy.

Introducing readers to the fantastical world of Curio, this novella is wrapped in adventure, romance, and intrigue. 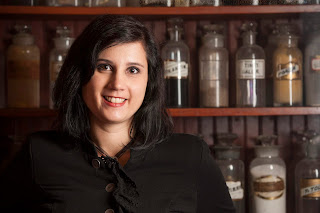 Evangeline Denmark’s debut Young Adult novel, CURIO, was an RT Reviews Top Pick, and USA Today’s HEA blog called the world-building “two levels of genius.” She has also co-authored children’s books and published shorter works of fantasy. Fairy tales, folklore, and magical elements form her creative substrate and weave through every project, whether she’s writing about this world or another.

Evangeline is an active member in her local arts community and is passionate about encouraging creativity in young people. From school visits, to speaking at conferences, to paneling at cons, Evangeline builds her platform on the principle that creativity is for everyone and everyone is creative.

She lives in Colorado with her engineer/artist husband, two sons, a passel of cats, and one long-suffering cattle dog.