Melissa Wright for
Days of Fantasy for Christmas 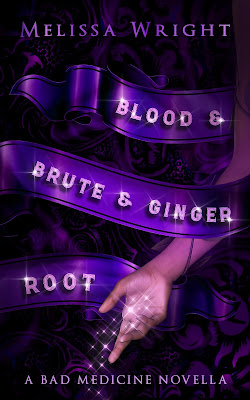 
Diana Coulton doesn’t have time for love. She’s got Bad Medicine—the family herb & book shop—to take care of, not to mention her chaotic sisters and censorious cat. No matter what Diana might want, romance is on the back burner for this Coulton sister.

Until the night well-meaning Bernadette decides to fix all that. Bernie knows better. Magic used to spur romance has a tendency to go haywire, all witches know that. She’s going to have to stop it.

If she can only remember how.

Before long, the local fire marshal shows up on Diana’s front step. But he’s not there to inspect the shop. He’s been caught in Bernie’s spell, and worse, he doesn’t even believe magic exists. Miles tries to get away from Bad Medicine, but he’s bewitched, and providence is not on his side.

Forces of nature conspire to throw Miles and Diana together, and time is running out to cure the enchantment. If they can’t figure out how to undo the magic hexing them, Diana could lose everything. But if they do, she might lose Miles.

You did not focus intent. You did not point. It was far too dangerous, even for little girls.

From a grown witch of Bernie’s caliber, it could be deadly.

Diana stepped forward, crunching a wayward twig beneath her shoe. At the sound, a hundred moths took flight, coming from under shelves and out of foliage in a swarm of wings and dust. They’d transformed, in a matter of hours, and fluttered like a moving cloud through the shop, circling Diana where she stood before shifting and coursing toward the open front door. They swarmed closer together, a dark mass, and then disappeared into the night.

How had it become night already?

Belle followed the path of the moths, swinging wide past Bernie to slam the front door closed and drive home the locks.

She turned, and each of them stared at the man at Bernie’s feet.

Diana inched closer, and finally, when she felt brave enough, squatted beside the body. He had a handsome face, but his chin was a little scruffy and shadows ringed his eyes. She wondered what the spell had wrought on him. She reached gingerly toward his jacket, pinching the edge of it between the tips of two fingers, and flipped it to the side.

She sucked in a breath and stood straight up, nearly knocking Bernie off balance where she waited leaned-in to see what Diana might find.

Staring back at them was an embroidered badge that read Fire Marshal.

Diana groaned, suddenly sick. “No,” she whispered. “No, no, no!” Her eyes found Belle, pleading. “This has got to be Abby’s doing. She hates us! She sent him to find a reason to shut us down and now we’ve…” She gestured helplessly toward the body on the floor. Her arms came in again to wrap around her middle. “This is going to cost us our business license.”

Belle’s lips pursed, shifted sideways as she tilted her head. She nudged the body with the toe of her boot. “I don’t know. I mean, if she hates you so much why did she send you a hunky fireman?”

Diana’s fisted hands snapped down at her sides. “He’s not a fireman!” She took a breath through her teeth. “This isn’t a joke. He is a fire marshal. As in, enforcing code.” She took a sudden step back, hand flying over her mouth. Her sisters were staring at her, so she let her fingers curl slowly into her palm to whisper, “Are caterpillars against code?”

Leave it to Belle to have the clear conscience and level head when they’d just killed a man.

Diana’s gaze snapped to hers.

“All I’m saying, is it will all be okay. We have done nothing illegal thus far.”

Belle shrugged. “Look, I’m not going to rule anything out. But we need to have a plan and panic will get us nowhere.” She looked at Bernie. “What was your intent?”

“Stop. That was basically all I had time to think.”

Belle nodded. “Great. So, nothing permanent.”

Melissa is the author of the Frey Saga, Descendants Series, and KING OF ASH AND BONE. She is currently working on the next book, but when not writing can be spotted collecting the things she loves at Goodreads and Pinterest. Contact her through the web at www.melissa-wright.com or follow her blog at authormelissawright.blogspot.com.

For info on contests and new releases, sign up for the newsletter here: http://eepurl.com/zbisj.