Days of Fantasy for Christmas and Giveaway: J.M. Hackman

J.M. Hackman for
Days of Fantasy for Christmas 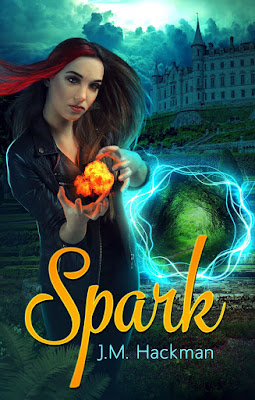 Brenna James wants three things for her sixteenth birthday: to find her history notes before the test, to have her mother return from her business trip, and to stop creating fire with her bare hands.

Yeah, that’s so not happening. Unfortunately.

When Brenna learns her mother is missing in an alternate reality called Linneah, she travels through a portal to find her. But Brenna’s arrival in Linneah begins the fulfillment of an ancient prophecy, including a royal murder and the theft of Linneah’s most powerful relic: the Sacred Veil.

Unwilling yet left with no other choice, Brenna and her new friend Baldwin pursue the thief into the dangerous woods of Silvastamen and beyond. Exactly what Brenna wanted to do for her sixteenth birthday. When they spy an army marching toward Linneah, Brenna is horrified. Can she find the veil, save her mother, and warn Linneah in time?

At the top of the stairs, a rush of air carrying the scent of wood smoke, moist earth, and sea salt filled my nostrils. On my left, a door to a small balcony stood ajar, letting in the fresh night air. A guy about my age stood near the balcony’s iron railing, his dark head bowed. He was seriously hot, his profile lit by the hallway torches. Dark, mussed hair, square jaw, and a straight nose—but the solemn set to his mouth drew me.

Was he okay? I could—you know what? None of my business. I started to turn away.

“Hey, how’s it going?” I got ready to run in case he turned the wicked-sharp knife on me.

With a start, he slipped his hands behind his back.

“Nice knife you have there.”

His jaw tightened, and he shot me a glare. “I prefer to be alone.”

“Yeah, good luck with that.”

Heaving a sigh, he gazed at the shadowed scenery. From opposite sides of the horizon, two bright, glowing bands bisected the night sky. The twinkling stars gleamed through the rings before scattering to meet the shadowed black cliffs in the distance. Nearer the castle, the tiny glimmers of the surrounding city glittered, pinpricks of light.

“Wow. That’s incredible.” I pointed to the shining display. The whole scene was wonderfully romantic, but here I was, stuck with a knife-wielding weirdo. Really cute, but still a weirdo.

“The Petrus Rings. They encircle the planet.” Several beats of silence passed before he spoke again. “You are not going to leave me alone, are you?”

“No, probably not. I don’t want you slitting your throat or jumping off this balcony. Or both.” I paused. “Though that might be a little difficult to do at the same time.”

A chuckle escaped him. “I am not intending to harm myself.”

“Good. Then put the knife away, and we’ll all feel better.”

Slipping it into the sheath at his waist, he held up his hands. “Better?”

His biceps flexed when he crossed his arms and leaned against the iron railing, his eyes attentive. “My name is Baldwin, and I am guessing you are one of the new visitors. The whole town is talking about your arrival.”

“It is always an event when strangers visit, but your entrance was epic.”

Great. In the dim light, maybe he wouldn’t notice my blush. “I’m Brenna.” 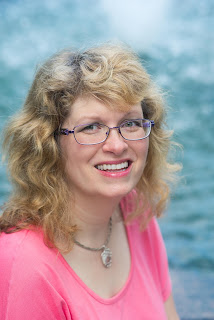 J. M. Hackman loves thunderstorms, bookstores, and happy endings. She’s never met a reading nook she didn’t like and prefers soul talk to small talk. When she’s not writing, she spends time with her two munchkins and her handsome husband who support her in this crazy profession.

Her short stories have been published in the anthologies Realmscapes, Mythical Doorways, and Tales of Ever After. Her award-winning YA fantasy Spark (Book One of The Firebrand Chronicles) was released in 2017 from L2L2 Publishing. The sequel, Flare, is scheduled for an early 2019 release. She spends her days writing stories, consuming massive quantities of dark chocolate, and looking for portals to other worlds.