J. Ellen Ross for
Days of Fantasy for Christmas 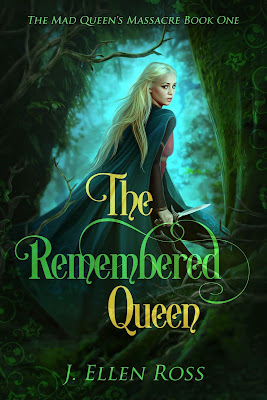 "They've started calling me the Remembered Queen. Because no one will ever forget what I did."

Jon grew up a petty criminal, picking pockets and running dice games in Anhalt, the cosmopolitan capital of Forint. Now, he lives in a tiny backwater, hiding from his past and trying to forget a tragedy so large it nearly destroyed him.

His boring, quiet life is shattered when a strange girl appears – a young woman claiming to be Aviana, Queen of Tolar.

The girl is haunted, confused, destitute and half-starved. On her back, someone carved a tattoo to hide a powerful spell, but she has no memory of who cast it on her. Hunted by men and nightmare creatures, she might be the Remembered Queen. And as he's drawn to her, Jon knows he's either taken responsibility for a mad, troubled girl or solved the greatest mystery the Ivory Kingdoms have ever known.

Sitting upright, the girl shifted on her stool and waved to Marit. “Another, please,” she said, tapping her mostly empty mug. Her voice came low and smoky, with a hint of slurring.

From behind the bar, Marit raised her eyebrows and then shrugged. She snagged a smaller clay cup from a shelf and filled it. Then she slid it across the bar top.

The girl seemed to ponder over the drink, weighing what she should do with it. Then, without warning, she turned to face Jon. Bleary eyes focused on his face and she asked, “What would you do if you met a monster?”

Jon felt his lips twitch up in a smile. Her accent was foreign, odd and lilting and he could see how young she was. Early twenties? Drunk and in a strange tavern, all alone. “A monster, my lady? I guess it would depend on the sort of monster,” he said, trying to keep the amusement from his voice. She had not had all that much to drink, but perhaps she did not drink often.

The girl nodded, as if his answer made all the sense in the world. She pressed her lips together and frowned before continuing. “What if you met someone who started a war and killed everyone they loved?”

Something about her words, or the tone of voice, the certainty, it chilled him. “I don’t think I’m likely to meet someone like that.” Jon returned to his drink, hoping she would lose interest in talking. He certainly had.

She searched his face and he saw a strange intensity hidden in her eyes, below the surface. Buried there, he saw a weary soul, exhausted by its burden, and Jon wondered who sat next to him at the bar.

But then she spoke again, her voice a strained whisper, and her words broke the spell.

“History has already begun calling me Aviana, the Remembered Queen. Because no one will ever forget what I did.”

Ah, Jon thought as a hand squeezed his heart. He did not need to hear more to understand. Even here in Forint, tales of Aviana, the mad queen of Tolar, had spread. Minstrels sang songs and wrote poems about her. Still, on rarer occasions, men arrived to announce new rewards for the missing queen’s capture. For the first year after the events in Tolar, the tragedy of it all, all anyone could talk about was the young queen’s rise and shameful fall. In the intervening years, people had lost interest in her as other scandals, real or imagined, emerged.

But, ever since the happenings in the neighboring kingdom two years ago, young, troubled women had appeared, claiming the identity of the vanished queen. Sometimes, they were beggars, hoping to profit from the unwise or unwary. But, Aviana’s crimes, heinous and hideous, the tragedy of her wedding, the romance of her disappearance. It seemed to enchant the mad and disturbed. Sad business that.

The girl did not notice the uncomfortable silence settling between them. “Aviana the Mad. Because for the six weeks I was queen of Tolar, the streets were filled with blood, the rivers ran red. Men died.”

Tears welled in her eyes, then slid down her cheek, spilling on to the bar.

Jon shifted on his stool, unsettled by her sadness. “I doubt you’re a monster,” he said, trying to catch Marit’s eye as she chatted with a couple near the door. The girl did not need any more drink. She needed a place to sleep off the alcohol and someone to fetch the town priest. 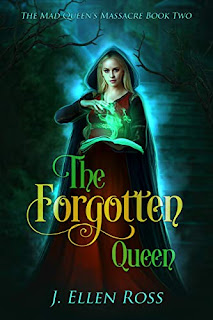 Jon and Aviana’s luck has run out.

Once a petty criminal and hay-mower for hire, Jon’s quiet life was shattered when he found Aviana, the Remembered Queen, on a barstool in a tavern.

Aviana, who ordered the slaughter of hundreds during the Mad Queen's Massacre.

Aviana, who fled her throne and vanished two years ago.

Convinced the confused, haunted girl had been a pawn in a deadly plot, he rescued her and for a year, he has hidden the queen of Tolar from the mage who once controlled her. In tiny villages and run down cottages, he's helped Aviana rebuild a life. But the mage isn’t done with her and his bounty hunters are scouring the countryside, hunting for her.

Freed from the spells used to enslaved her, Aviana wants nothing more than to fade into obscurity - to disappear and be forgotten. But she’s a deposed queen, a pawn for powerful men who would give anything to find her, and her luck has run out.

Swept away to the High King’s city of Alabaster, Aviana will face her old enemy and their confrontation will shake the foundations of the Ivory Kingdoms. 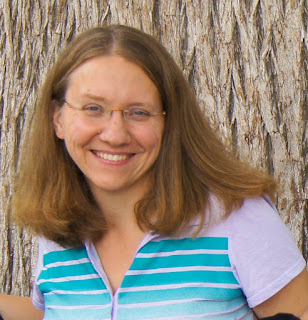 I'm a Texan living in Wisconsin who loves fantasy, dragons, and magic. I have two rescue dogs who cuddle with me when I'm writing and who wonder why I moved them to the frigid north. When I'm not writing, I like to draw and paint and hike in the pretty forests nearby.