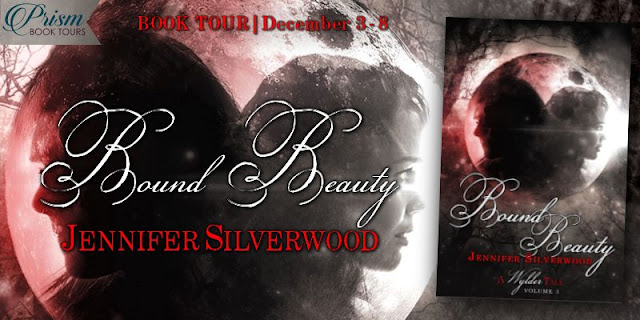 ...Bound Beauty is the third and (mostly) final volume in this series. Not only do we finally get a peek inside the true nature of the prince’s curse, but we get epic romance, epic journeys and one very epic beastly battle. And because this is Gothic fiction, plenty of ghosts, magic and heaving bodices. ;) Thanks for coming on this adventure with me, fantasy avengers! 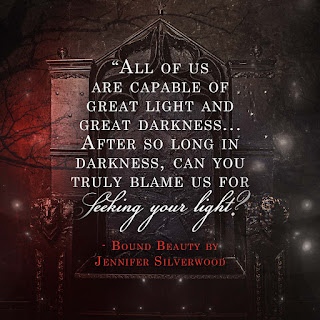 1. Wylder Tales takes its name from the borderland between our world and the magical world across the Veil, Wylderland.

2. Vynasha’s journey is loosely based on Beauty and the Beast, but written more like a “the legend behind the fairy tale” than a strict retelling...

Vynasha stiffened as familiar sensations washed over her, the sound of dripping water on cobblestone, the scent of her beast. She opened her eyes in fear and released a breath of relief to meet a pair of emerald rather than silver.

“Baalor?” Her voice was scratchy from sleep, strained from more nightmares, no doubt.
Concern creased a faint line between his brow, but then his fingers brushed her curls from her face and he smiled. “I have missed your face, witch.”

Vynasha bit her lower lip and didn’t mind the prick of sharp teeth, not when his were sharper. “Wish I could say the same, brute.” She reached to touch his beard and took in his haggard look. “You just got back.”

Baalor’s smile widened, though it couldn’t disguise his fatigue. Or the darkness lingering in his eyes. “Do you always sleep by the fire when I am away?”

It said something of the nature of majik, that Vynasha found Grendall’s amulet so easily. She clawed at the snow until she reached a hole in the dirt and uncovered Erythea’s hiding place. The sight of Old Ced’s towsack wrenched a dry sob from her chest.

“Nothing is as it seems…” Father had said before he died. Before she killed him.

She tore a hole in the sack in her haste to retrieve the amulet and snarled at the ----ed amethyst in her hands. Her hands shook as she fell back into the snow at her feet and gripped the talisman. Grandmother had once called this a key and a burden. Thea saw it as a weapon. Vynasha yearned to welcome the security of the bond, longed to feel in control of her majik again. She wanted to throw it as far as the east is from the west.

What's in a Cover?

I have a very unique relationship with my cover designer. I first discovered Najla Qamber in 2012, when I was scouring Deviantart for talented artists. I had drawn a cover for one of my novellas, but knew it wasn’t quite up to snuff. Also, I wanted someone to design my cover for my current WIP, Silver Hollow. I stumbled across Najla’s profile, messaged her and the rest is history. Well, not quite. Najla has covered every single one of my novels (and recovered...bless her). Every time I gave her a concept stirring around in my brain, she broke through my expectations with her brilliance...

"...I enjoyed this retelling of Beauty and the Beast. It ends with a cliffhanger that makes me want more. . . . Scarred Beauty is a pretty good addition to the Wylder Tales series. . . . I cannot wait to get my hands on Bound Beauty to see what happens next. I enjoy Jennifer Silverwood's story telling." 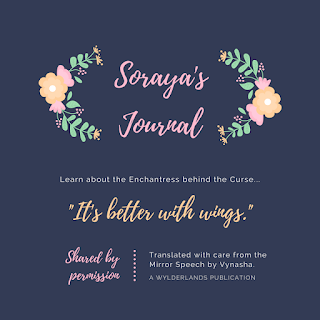 I suppose it best to finish an enchanted text with a proper introduction. After all, the spells shall not take effect without the name of the caster. Everything begins with a name. My name was Soraya Wenderdowne and I was born to the most noble royal house among all the Fayere of Lunnae. The other peoples call us “lightwings,” but only the royal houses still bore wings of honor. I had always been proud of my wings. Not only were they my most beautiful feature (and trust me when I tell you I was not unpleasant to look upon) but my wings allowed me to fly...


Declarations of a Fangirl - Excerpt

Vynasha sucked in a sharp breath of cold air and leaned heavily on her walking stick.

A firm, but gentle hand squeezed her shoulder. “Alright then, beasty?” Wolfsbane turned his head, before she could catch more than a glimpse of his concern.

Vynasha touched his glove with her clawed hand and smiled. “Just need a moment.” This was a lie, of course. Her calves no longer burned from endless days of hiking up and down mountains and through slippery brambles.

“Aren’t you disgusted by me?”

He jerked back as though struck and she could feel his temper brewing. “Why would I be disgusted by you?”

Vynasha’s knee ached with a sharp pang and she closed her eyes, unconsciously squeezing his arm tighter.

His free hand clasped her waist as he came to face her. “Vynasha,” he beckoned her look at him. “Allies?”

She laughed so she wouldn’t cry, then held up her clawed hand. “Look at me. I’m not what I was before.” She grimaced and shook her head. “I have never been beautiful, I know, but…” 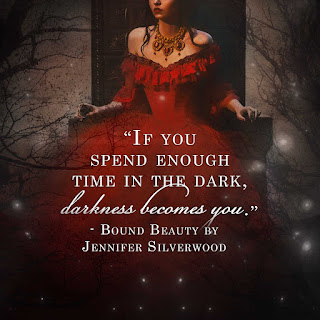 "Embark on an epic retelling of Beauty and the Beast with a twist and a gothic flare!"

In the beginning, all the prince of Bitterhelm could see was the curse.

By day he walked the shadowed halls of his forefathers, the bitter remnant of his kingdom. By night his bones snapped in a moment of agony, until his cries fell into roars. He learned quickly, after wreaking havoc to all the furniture in his stately chamber, to confine himself to the dungeons. There, only the other beasts could hear his screams.

Once the night was through, his manservant, Odym appeared with keys to lead his master back to his chambers. The broken furniture had been discreetly cleared away by the other servants, replaced by pieces from the king’s vacant rooms. Grendall had been too weary to punish them, though his skin crawled for different reasons, lying in the bed of his father.


Books to Light Your Fire - Excerpt

Erythea’s sigh interrupted Vynasha’s darker thoughts. The girl was always chattering about every thought which entered her head. “I’ve never seen spring, did you know?”

Vynasha blinked and for a moment, saw the valley of Whistleande, carpets of fuchsia heather and sage grass.

Thea touched stray branches, infusing blue tendrils of energy into the sleeping buds. “My majik is tied to the earth like Mother’s. It wants to end this winter and let things grow.” She glanced over her shoulder at Vynasha with a crooked smile. “Did you know the last true spring hasn’t come in an age?”

Vynasha pressed her claws into her palms. “Since the curse,” she whispered. Her voice held a rasp she couldn’t shake, ever since the fire. Not even her transformation under the curse could hide what she was before. 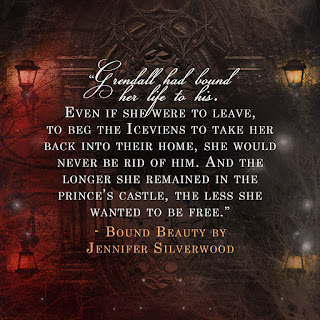 First off, apologies for the misleading title. This is not the third part of a blog serial. It is, however, a post about trilogies, specifically mine. Wylder Tales is a darker (often Gothic) fantasy retelling of Beauty and the Beast. When I approached what I simply titled “Vynasha” I wanted to tell the classic fairy tale with a legendary bend, much like Snow White and the Huntsman. My first incarnation of Volume 1 was a little different from what you know today. It was also extra heavy on the prose. I can’t help myself sometimes, being a life-long fan of L.M. Montgomery, to love the beauty of language. But I learned over the following two years that the story was too stagnant and bogged down. On the encouragement of my writing coach, I returned to Vynasha and added more characters like Hvalla, Wolfsbane and Resha, cut off most flashbacks and expanded the dialogue. Thus, Craving Beauty was born...

That night, they danced among the Hall of Mirrors, as summer moonlight filtered through the windows. He had kept them closed for so long, but wanted to see the way the stars played off her hair. She was light and laughter incarnate.

He proposed after their prancing steps fell into a sensuous lilt. She sucked in a breath, indeed every servant and even the walls seemed to still, waiting for her reply.

Her smile was soft as she whispered, “Yes.” 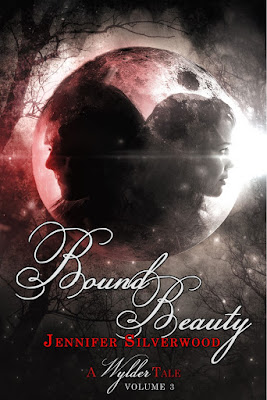 
Beware the bond between blood and beasts...

Vynasha has united the warring human and forgotten clans of Wylderland, claiming her majik and power as curse breaker. Her brother, Ceddrych keeps their nephew safely hidden away while Vynasha and her new allies fight against the feral beasts roaming their borders.

Meanwhile, her friendship with the Iceveins family deepens, unveiling a love she never expected. But her majik is still bound to the cursed prince she left behind and he isn't done fighting for her soul.

Darker forces walk in the forests, all drawn to Vynasha's light and the shade of a corrupt Enchantress haunts her waking dreams. A war is about to begin, between the forgotten people of Wylderland and the evil power of Bitterhelm.

Prophecy and Forgotten unite in the epic third chapter of the Wylder Tales Series, a gothic re-telling of Beauty and the Beast. 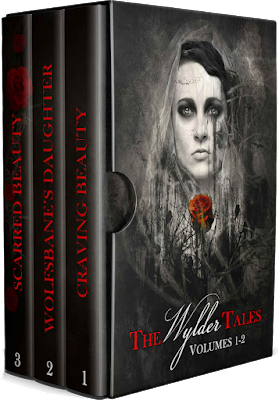 Grab the first book, Craving Beauty, for FREE! You can find your preferred
format here. Or grab the compilation of volumes 1, 1.5, and 2 on Amazon.

Jennifer Silverwood was raised deep in the heart of Texas and has been spinning yarns a mile high since childhood. In her spare time she reads and writes and tries to sustain her wanderlust, whether it’s the Carpathian Mountains in Transylvania, the highlands of Ecuador or a road trip to the next town. Always on the lookout for her next adventure, in print or reality, she dreams of one day proving to the masses that everything really is better in Texas. She is the author of two series—Heaven's Edge and Wylder Tales—and the stand-alone titles Stay and Silver Hollow. 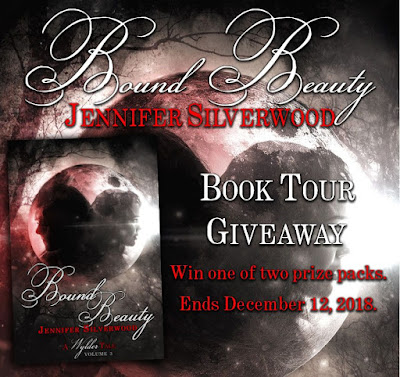 PRIZE PACK #1: Print copies of Wylder Tales Vol 1-2 along with a "Gothic fairytale" themed basket. (US only.)
PRIZE PACK #2: $10 Amazon eGift Card and winner's choice of two of the author's ebooks (if a novella series is pickes, i.e. Heaven's Edge, then all three novellas will be included). (Open internationally.)