Blurb Blitz and Giveaway: The Night Before Christmas by KS David

This post is part of a virtual book tour organized by Goddess Fish Promotions. K. S. David will be awarding a $15 Amazon/BN GC to a randomly drawn winner via rafflecopter during the tour. Click on the tour banner to see the otherh stops on the tour. 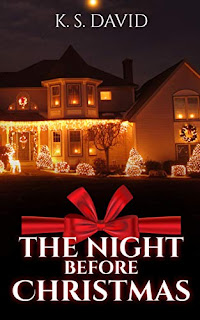 From the author of A Promise Kept and Every Single Wish, comes an exhilarating romantic suspense for the holidays.

As Center City and its quirky residents get ready to ring in the holiday with merriment and good cheer, Calista Tate is forced to make a terrible decision? Does she stay and fight for the life she's created or - does she run away? One man could be her angel - her saving grace. And, the promise of love may be strong enough to make her hold her ground. The wrong decision could put them both at risk.

Calista Singletary decided it was finally safe to settle down. She opened a small bakery, has a new home and life is good. That is until she gets arrested for killing her elderly neighbor. It doesn’t help that she chased the old man out of her house with a rolling pin two days earlier. The same rolling pin is found under his bruised and bloody body. Calista thinks some trickery is underfoot. Good thing her sexy attorney, Marc Collins, thinks he can get the charges dropped.

But Calista knows that when the authorities start digging, they’re going to uncover her true identity. That’s when the real horrors will begin. She usually stays packed and ready to blow town at the first sign of trouble - assuming a new name, a new look, a new story. But she’s growing close to Marc and just once, she wants to feel normal. Will the cost be too high?

Three years earlier, the man Calista loved sucked her into a world of indescribable horror. She’s the only one who can testify to the atrocities he committed by Thomas Langston. She stole three million dollars of his money and maimed him the day she left. In return, Thomas made her a promise. He would always love her. He would never stop looking for her. And the next time he saw Calista - he was going to kill her.

"He walked in on me in the bathroom!"

I had been taking a well-deserved bath. After a sixteen-hour day in my bakery, my hands felt like rubber, my ankles were throbbing, and my back felt like I'd been beaten with a baseball bat. The break would feel like a week-long vacation, and I intended to take advantage by sleeping in, eating junk, watching a little football and reading a good book. A hot, steamy bath had been on my too-do list all day. Love ballads filled the halls of my house, and I planned to polish off a bottle of Chablis.

I rolled my eyes to the night sky annoyed. Fred's encouragement came from another neighbor who shared the center of our cul-de-sac with a man who'd been a thorn since the day I moved in. I didn't know his name - didn't care either, but I knew his taste in music, women and the brand of beer he preferred. Loud music boomed from his backyard nightly. He wore aged denim and a t-shirt so old the letters had started to peel. A soiled black bandana was pulled low over his brow and tattoos covered visible skin - except his hands, his neck and his face. I could always tell when he was coming or going because the motor in his Harley made my windows shake. I squinted up at the man. Streetlights barely illuminated his face and his bandana made it impossible for me to get a good look at him, but he had a firm jaw and full lips. Catching my examination, he winked. I sneered at him. I didn't do grimy and I didn't do assholes - at least, not anymore.

About the Author:K. S. David lives in the Mid-Atlantic with her husband, their three children and a menagerie of pets. New storylines are constantly running through her head. She keeps notebooks tucked in pockets of the car, the nightstand and makes voice recordings just about all day long. She's addicted to true life mysteries and crime shows, both of which marry well with a great romance. Some of her favorite things are long walks, reading in bed, baking and of course, writing her next novel.

https://www.amazon.com/Night-Before-Christmas-K-David-ebook/dp/B07K7151P1
The book is on sale for only $0.99.
a Rafflecopter giveaway