Jennifer Silverwood for
Days of Fantasy for Christmas 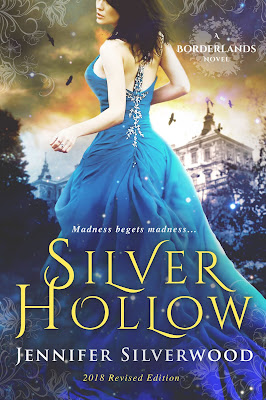 Amie Wentworth trusts books more than people. After her parents' deaths ten years before, she writes fiction to escape reality. A timely invitation from her long-lost uncle arrives, but she's used to ignoring the mysterious surrounding her life.

Until she is stabbed in an alley and brought back to life by a handsome stranger. Soon Amie is dragged into the very sort of tale she is used to selling. To make matters worse, the man who saved her life keeps turning up and her would-be-murderer is still at large.

After crossing the Atlantic to her father’s homeland, she discovers a world beyond imagining. Silver Hollow is a place of ancient traditions and supernatural dangers, where everything is the opposite of what it seems and few escape sane. Faced with an impossible choice, Amie is forced to confront a deadly family legacy while remembering a life she soon wishes to forget. 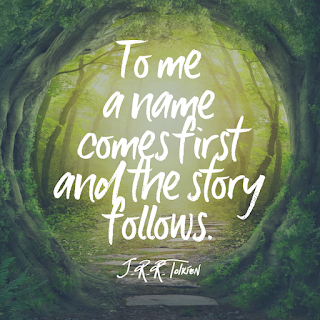 I remember reading articles that said Tolkien, when he was writing his Lord of the Rings saga, began with names. A linguist himself, it’s not surprising that he believed that our history can be told through our words and names.

Let me state for the record I am not J.R.R. Tolkien, nor am I Robert Jordan or any of the brilliant fantasy authors who made me want to write. But I am proud to admit they taught me a thing or two about characters, places and the meaning behind the name. If you read their stories, particularly Tolkien, you can almost feel the connection between the name and what that place or person truly is. If only we had a guide to duplicity in real life, right?

For Silver Hollow, I wanted to give my characters a little extra meaning and give some hints as to their true nature. After all, you’ll soon discover that everything in Silver Hollow is only the surface above hidden layers.

(Due to the location of Silver Hollow in the Borderlands, most of the names below are taken from Scotch-Irish/Celtic origin, while a few below are old Germanic.)

Emrys- Welsh form of Ambrose, who was a Romano-British military leader they later based the character of Merlin from.

Morcant- Morcant is my nod to a modernized Morgan le Fay. Her updated name is derived from Old Welsh, a form of “Morgan.”

Elisedd- Celtic for “kind.” (Her last name, Underhill, was my direct nod to Tolkien)

Drustan- A much older, Breton form of the name, Tristan. (My nod to Tristan & Isolde)

I’ve made you want to look up your name haven’t I? Well since you didn’t ask, I’ll tell you the meaning behind my name. Jennifer is a Cornish version of the Welsh name Gwenhwyfar or Guinevere and means pure spirit/fey. And just because I’m that nerd, I’ve included a link in the pic below to find the meaning behind your name too. Have fun and see you at the next tour stop!