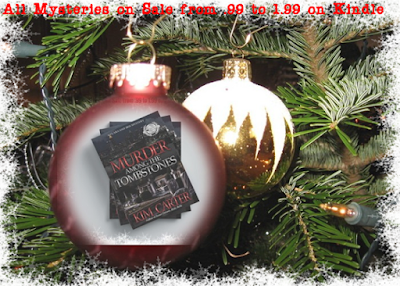 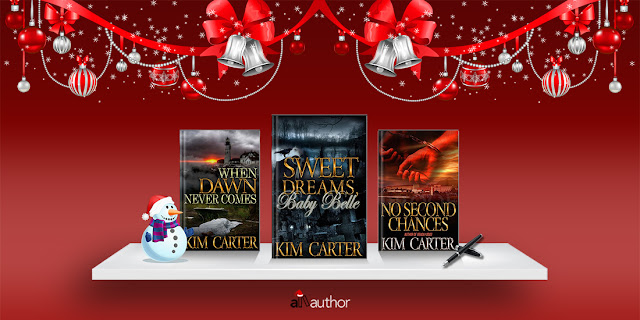 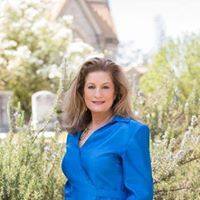 Kim Carter is an award-winning author of suspense, mystery and thriller novels.
She was a finalist for the 2018 Killer Nashville Silver Falchion Award and a recipient of the 2017 TCK Publishers' Readers' Choice Award for her book Murder Among The Tombstones. This is the first book in her Clara and Iris Mystery series. The characters in this series are a couple of overly curious widows who become private investigators. These funny women were inspired by Kim's mother and her mom's best friend.Her other titles include Sweet Dreams, Baby Belle, When Dawn Never Comes, Deadly Odds, No Second Chances, and her latest, And The Forecast Called For Rain. 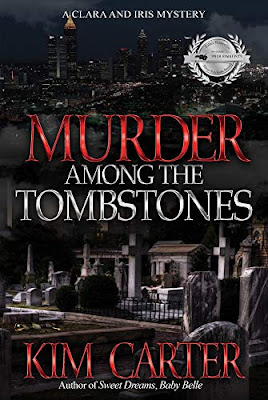 Murder Among the Tombstones
Amazon

A Clara and Iris Mystery

When Atlanta homicide detectives are called in to investigate the murder of a nineteen-year-old girl found dumped in historic Oakland Cemetery, they immediately begin working the case. But with no leads to follow, and their case log growing larger by the day, the murder quickly grows cold.

Desperate to keep the investigation of her deceased sister going, Ginger Baines hires two novice sleuths to solve the case. Widowed, well into their seventies, and new to the world of private investigating, Clara Samples and Iris Hadley aren’t your average private eyes.
When a second body is found in a neighboring cemetery, the plot thickens. With two bodies wrapped, almost lovingly, in a soft blanket before being discarded in a cemetery, could a serial killer be on the loose?

Joined by their young apprentice Quita, Clara and Iris are determined to stop at nothing to find the killer before they can strike again. But, will their bodies be the next ones discovered among the tombstones?

Murder Among the Tombstones is a fabulous fast paced mystery. I enjoyed the older characters of the book. Iris and Clara were so much fun together. Those two are quite the pair. They made me laugh out loud at times with their antics. The suspense was great and I enjoyed trying to solve the mystery right along them.

I give Murder Among the Tombstones four and a half stars. Looking forward to more by this author in the future. 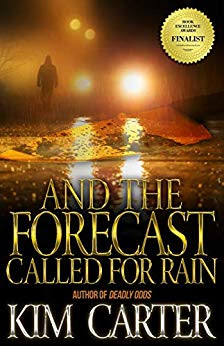 And the Forecast Called For Rain
Amazon

Detective Jose Ramirez and the Sierra Hills Police Department are scrambling for leads on a killer who has already struck five times, each time leaving his signature trademark: large butcher knives piercing the abdomens of his young female victims.

Profiling the killer is proving to be difficult, and Detective Ramirez knows that it’s only a matter of time before their perpetrator strikes again.

As if Ramirez isn’t frustrated enough, to his dismay, he is assigned a partner. Officer Daniel Chatham, a handsome, young man, fresh out of grad school, has pulled some strings to join the division and becomes Ramirez’s, right-hand man. The lead detective’s anger slowly begins to dissipate as he discovers the book smart kid can be quite the asset.

With Ramirez’s experience, Chatham’s sharp mind and quick thinking, and the insight of Erin Sommers, a beautiful, young journalist, the three make a powerful team gaining on their criminal.

It’s raining… it’s pouring, and a killer is on the loose in the rainy Sierra Hills of Washington State. No one is who they seem, and the plot thickens with every turn. You’ll never guess the ending of this enigmatic tale.

And The Forecast Called For Rain is yet another awesome read by Kim Carter. I instantly loved the characters right from the beginning. The plot involves some twists and turns I did not expect and could not have predicted. I had to know how the mystery would be solved and could not put the book down.

I give And The Forecast Called For Rain a well deserved five plus stars. Kim Carter has earned herself a new fan.