Gillian Bronte Adams for
Days of Fantasy for Christmas 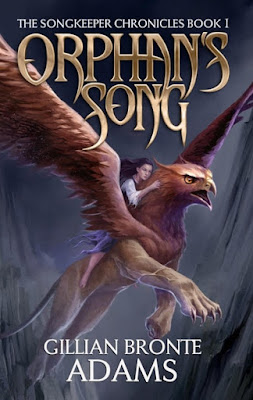 HER SOLO IS A DEATH SENTENCE

Deep within the world of Leira flows a melody that was sung at the beginning of time by Emhran, the Master Singer. Now it is broken, buried, forgotten. But in each generation, a Songkeeper arises to uphold the memory of the Song against those who want it silenced forever.

When Birdie first hears the Song coming from her own mouth, her world shatters. She is no longer simply an orphan but the last of a hunted people. Forced to flee for her life, she must decide whom to trust—a traveling peddler, a streetwise thief, or a mysterious creature who claims to know her past.

With enemies at her heels and war threatening to tear her homeland apart, Birdie soon discovers an overwhelming truth: the fate of Leira may hinge on one orphan’s Song. 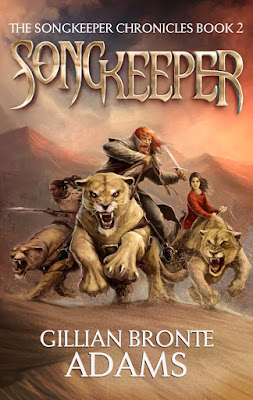 WAR RAVAGES LEIRA AND THE SONG HAS FALLEN SILENT.

Freed from the hold of a slave ship, Birdie, the young Songkeeper, and Ky, a street-wise thief, emerge to a world at war. Hordes of dark soldiers march across Leira, shadowed by whispers of plague and massacres, prompting Ky to return to his besieged home city in hopes of leading his fellow runners to safety.

Desperate to end the fighting, Birdie embarks on a dangerous mission into the heart of the Takhran’s fortress. Legend speaks of a mythical spring buried within and the Songkeeper who will one day unleash it to achieve victory. Everyone believes Birdie is the one, but the elusive nature of the Song and rumors of other gifted individuals lead her to doubt her role. Unleashing the spring could defeat the Takhran once and for all, but can she truly be the Songkeeper when the Song no longer answers her call? 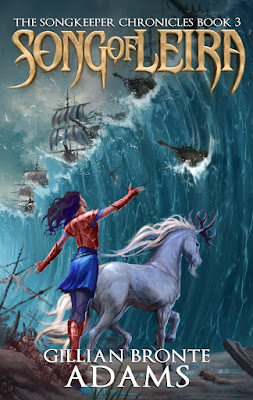 THE SONG BIDS HER RISE TO BATTLE.

Reeling from her disastrous foray into the Pit, Birdie, the young Songkeeper, retreats into the mountains. But in the war-torn north, kneeling on bloodstained battlefields to sing the souls of the dying to rest, her resolve to accept her calling is strengthened. Such evil cannot go unchallenged.

Torn between oaths to protect the Underground runners and to rescue his friend from the slave camps, Ky Huntyr enlists Birdie’s aid. Their mission to free the captives unravels the horrifying thread connecting the legendary spring, Artair’s sword, and the slave camps. But the Takhran’s schemes are already in motion. Powerful singers have arisen to lead his army—singers who can shake the earth and master the sea—and monsters rampage across the land.

As Leira falters on the verge of defeat, the Song bids her rise to battle, and the Songkeeper must answer.

Interview with Amos McElhenny
Prior to the events documented in Orphan’s Song, reported by Gillian Bronte Adams

He is already seated when I arrive at the Whistlin’ Waterfly. From the number of empty mugs, I guess he had company or has been here some time—the fly exploring his discarded meal seems to point to the latter. I rummage in my satchel for a parchment and quill as I approach.

GBA: Pardon me, but are you “the great Amos McElhenny”?

AM: (blinks bleary eyes and scowls) So they tell me.

GBA: My readers will be thrilled to know your story. Thank you for agreeing to this interview.

AM: Not sure I did exactly. (He scratches his head.) Who are ye with?

AM: Oh. Right. Well, I’ve stayed too long already. Time I was on my way—

GBA: Rumor is you have quite the interesting past for a traveling peddler from … Bryllhyn is it? That Waveryder village in the Westmark? Care to comment on the years you spent in Kerby?

GBA: Well, maybe not as Amos McElhenny the traveling peddler. Which is odd since your route takes you to every other village and town nearby. Is there something in Kerby you’re avoiding?

AM: Ye know, I don’t have t’ sit here an’ be interrogated. I’ve more important things t’ do.

GBA: Like checking on that girl at the Sylvan Swan? Speaking of Birdie, how did you meet her?

AM: Well, the innkeeper—Dalton—an’ I are old friends from … back in the day. So I always stop by t’ chat on my way through. She was only a wee wisp o’ a thing when I first met her. Somewhat about her reminded me o’ … well, I just felt I had t’ look after her.

GBA: I see. So what was it about Birdie that reminded you of the Songkeeper Artair?

AM: Well, there was a sort o’ music in her laughter even then an’—bilgewater, what are ye goin’ an’ puttin’ words in my mouth for? Birdie doesn’t remind me o’ him. If she did, I’d stay away, ye can bet yer britches on that. I’d like nothin’ better than t’ forget I ever knew him.

GBA: Why is that? If you don’t mind sharing …

AM: I do mind. (But he doesn’t leave.) He lied t’ us is all. Deceived us with sweet words an’ left us to ruin. What wouldn’t I like t’ forget about that? Was it Nisus put ye up t’ this? Sounds like his doing. Tell him we were fools then an’ he’s a fool now if he still believes. (Stands and throws on his overcoat.)

GA: Wait. (I grab his arm) Look, I know who are and I think my readers deserve to know too.

Amos: Aye. (He pulls free.) I’m the great Amos McElhenny. (He strides away with a muttered “bilgewater” and leaves me with more questions and fewer answers than when I began.) 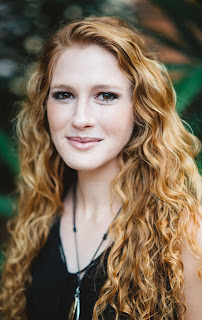 Gillian Bronte Adams is a sword-wielding, horse-riding, wander-loving fantasy author, rarely found without a coffee in hand and rumored to pack books before clothes when she hits the road. Working in youth ministry left her with a passion for journeying alongside children and teens. (It also enhanced her love of coffee.) Now, she writes novels that follow outcast characters down broken roads, through epic battles, and onward to adventure. And at the end of a long day of typing, she can be found saddling her wild thing and riding off into the sunset, seeking adventures of her own (and more coffee).

She loves to connect with fellow readers and wanderers online through her blog, Facebook page, and Instagram.

Posted by Amybooksy at 8:00 AM