This post is part of a virtual book tour organized by Goddess Fish Promotions. Hope Waters will be awarding a $50 Amazon/BN GC to a randomly drawn winner via rafflecopter during the tour. Click on the tour banner to see the other stops on the tour. 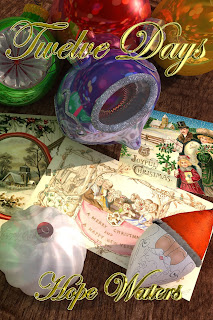 Zoey Blake is having a perfect holiday season. Finals are over and it's time to head home for Christmas, but when she wins the Hartbreakers True Love contest to join them of their tour, she has a chance to follow her favorite band for twelve days -- and twelve steamy nights.

Mackenzie Hart has been a player since and joining Hartbreakers has only edged up his game, that is until he meets Zoey. She's turned his world upside down and only she can make it right. Now all he has to do is convince her to stay with him forever. For a guy like Mack, that shouldn't be too hard but it's gonna take all he has and twelve days to win her true love.

So this is your room?”

I nodded, hiking my backpack higher on my shoulder. I leaned up against the doorjamb, watching all the people running up and down the corridor as they settled into the hotel for the night.

Mack leaned against the wall, glanced at his phone and tried to stifle a sigh. “Tired?” I asked.

“Why didn’t you take a nap this afternoon?” I asked.

“Because…I wanted to talk to you.”

I smiled. Mack wore his heart on his sleeve. He was a straight shooter and I admired that about him. You couldn’t dislike him either. “That’s sweet,” I said.

“Yeah,” he said and looked into my eyes. I met his gaze, not wanting to break the magic of this moment. “Um, was…would you like to, you know, see more of each other while you are on tour with us?”

A pit started in my stomach. I wasn’t sure what I was most scared of. I was scared that Mack would hurt me emotionally. I was scared of leaving him behind after the tour was done. Or him using me and leaving me behind.

But most of all I was scared of falling for him. Scratch that. I had already fallen hard.

He leaned into me and I met him halfway.

God, he was a good kisser.

About the Author: Straight out of fandom, Hope Waters has been writing for over thirty years. From a young age, she was crafting stories to entertain others of all ages and continues to do so to this day. Hope uses she/they for pronouns and enjoys a good book with a cup of coffee and snuggles from her cats.

Twelve Days is the first book I have read by Hope Waters. I thought it was a good and quick short Christmas read. I enjoyed Zoey Blake and Mackenzie Hart together. They had good chemistry and fun. Though, I did feel like the story to be too rushed at times. I would have loved it so much better if it was a full length novel. I could only imagine what Zoey and Mack would have gotten into then.

I give Twelve Days three and a half stars. It is definitely worth a read.